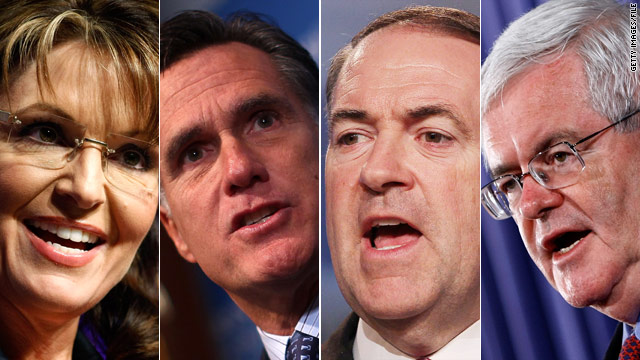 Usual Suspects at the top of the 2012 polls

Former House Speaker Newt Gingrich was a distant fourth, at nine percent, followed at eight percent by New Jersey Gov. Chris Christie, who has repeatedly said he is not going to make a bid for the White House in 2012. Everyone else was in the low single digits.

Similar results from an NBC News-Wall Street Journal survey that was also released in the past 24 hours. That poll indicates that Romney with the support of 19 percent, followed by Huckabee at 18 percent, Palin at 14 percent, Gingrich at ten percent, and Rep. Ron Paul of Texas, who made a bid for the last GOP presidential nomination, at eight percent. Everyone else is at five percent or lower.

To be fair, polls at this stage in the race for the White House are heavily influenced by name recognition and popularity.

While many potential contenders for the GOP nomination are making moves behind the scenes, this cycle appears off to a slower start than the past two battles for the White House. Only one person, businessman and conservative radio talk show host Herman Cain, has taken the first official step in setting up a presidential exploratory committee.

The ABC News/Washington Post poll was conducted Jan. 13-16, with 1,053 adults nationwide questioned by telephone. The survey's overall sampling error is plus or minus 3.5 percentage points.

The NBC News/Wall Street Journal poll was conducted Jan. 13-17, with 1,000 adults nationwide questioned by telephone. The survey's overall sampling error is plus or minus 3.1 percentage points.