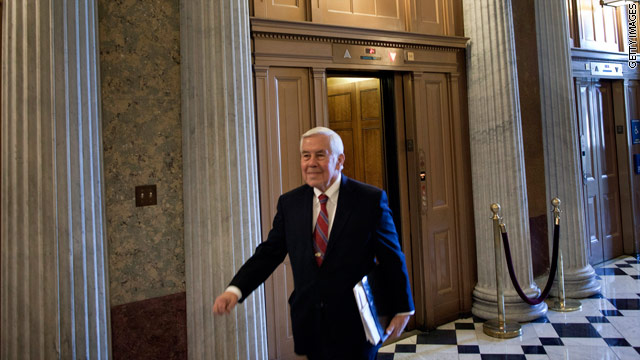 On Friday night, hours before a major meeting of Tea Party and other conservative leaders from around the state to try and limit the number of candidates who may challenge Lugar, the six term senator who's up for re-election next year is holding his first big fundraiser in Indiana this cycle.

Senior Lugar Adviser Mark Helmke tells CNN that more than 420 people are expected to attend the fundraiser, which is expected to bring in more than $400,000.

"This is still the year before the year, and I can't recall a time when there's been this vigorous activity in Indiana in regards to a Senate campaign," Lugar told reporters at a breakfast sponsored by the Christian Science Monitor.

As for Saturday's meeting, Lugar, who officially announced earlier this week that he's running for re-election, says, "I take any opposition seriously."

The most senior Republican member of the Senate has been criticized by some grassroots conservatives and by some potential GOP challengers for his willingness to work with Senate Democrats to seek bipartisan solutions for his votes in favor of confirming Elena Kagan and Sonia Sotomayor - President Barack Obama's two nominees to the Supreme Court - for his 2008 vote in favor of the Troubled Asset Relief Program, better known as TARP or the Wall Street bailout, and most recently, his early public openness to vote in favor of the START treaty with Russia.

Lugar met last month in Indianapolis with local Tea Party leaders but apparently did little to persuade them of his conservative credentials. The two-hour meeting, which took place over breakfast on December 13 at a Marriott hotel in downtown Indianapolis, was described by participants on both sides as "cordial." But the Tea Party activists left vowing to oppose Lugar's bid for a seventh term.

Greg Fettig, the co-founder of Hoosiers for a Conservative Senate, attended that meeting. The group was formed to find a conservative primary challenger to Lugar. He expects a strong showing at Saturday's conference.

"We now have 80 Tea Parties from around the state represented, which is over 90 percent of all known Tea Party groups in Indiana. The last few days have seen hundreds of people calling in trying to get a seat at the meeting. Most are individuals, or leaders of conservative but non tea party groups, and some are county level GOP office holders," Fettig tells CNN.

Some Tea Party leaders say they would could support either state Sen. Mike Delph or state Treasurer Richard Mourdock if they mount challenges to Lugar.

The winner of the May 8, 2012 GOP primary would most likely be considered the favorite to win the general election.

The 78 year-old lawmaker was first elected to the Senate in 1976 after serving as mayor of Indianapolis. Lugar did not face a primary challenge in 2006 and won 87 percent of the vote in the general election, facing only a libertarian candidate.