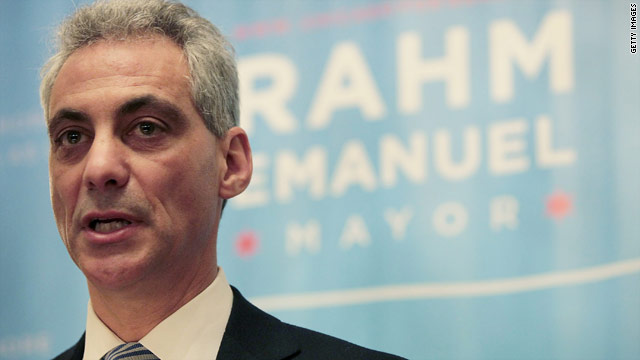 Washington (CNN) - Just over one month from Chicago's mayoral election, a new poll indicates that front-runner Rahm Emanuel is closing in on the crucial 50 percent threshold, which would prevent the need for a runoff in April.

According to a Chicago Tribune/WGN survey, 44 percent of city voters back the former White House chief of staff for mayor, with former Sen. Carol Moseley Braun at 21 percent, former Chicago Board of Education president Gery Chico at 16 percent, City Clerk Miguel del Valle at seven percent and nine percent undecided.

If Emanuel wins more than 50 percent of the vote in the February 22 contest, there will be no need for a runoff election in April between the top two finishers.

The new survey, released Thursday evening, indicates that Emanuel is far ahead among females and white voters, and has a good amount of support among African-American and Latino voters as well.

Since the last Tribune/WGN poll was conducted five weeks ago, the field of candidates has shrunk, and Emanuel, Braun and Chico have all gained in the survey. Two prominent African-American candidates, Rep. Danny Davis and state Sen. James Meek ended their bids for mayor and endorsed Braun as the "consensus" black candidate.

The winner will succeed longtime Chicago Mayor Richard Daley, who announced in September that he would not seek a seventh term in office.

The Chicago Tribune/WGN poll was conducted Saturday through Wednesday, with 708 likely registered voters questioned by telephone. The survey's sampling error is plus or minus 3.7 percentage points.