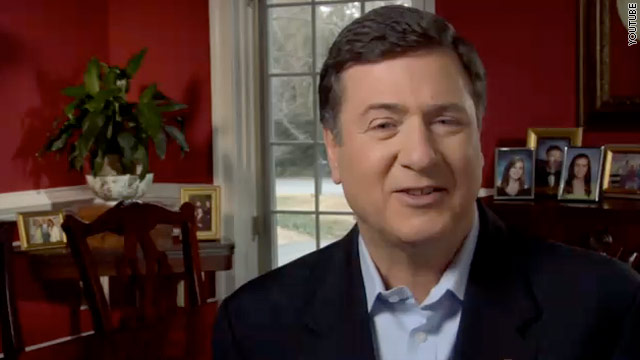 (CNN) - Former Virginia Governor and Republican Sen. George Allen made his campaign announcement official Monday with the release of a video on his website.

"Today, I'm announcing my candidacy for the U.S. Senate," Allen said in the almost three minute video. "You know me as someone willing to fight for the people of Virginia, and I'd like the responsibility to fight for you again. Hire me on for six years and I pledge to work hard restoring freedom, personal responsibility and opportunity for all."

Allen said the commonwealth needs a leader who will listen to the voices of Virginians and fight to "repeal and replace this government mandated health care experiment, pass a balanced budget amendment and the line item veto and reduce our families' energy costs."

He lost the 2006 Senate election to Democratic Sen. Jim Webb, who has yet to commit to a 2012 campaign.

In Monday's video Allen said he has been traveling throughout the state and people are "anxious and worried" about their future.

"The pivotal elections coming up in 2012 are going to determine the trajectory of our country, whether the opportunity to achieve the American dream will continue to decline, or begin to ascend again," Allen said.

At a campaign event in 2006, Allen was recorded by a Webb volunteer calling an attendee of Indian descent, "macaca," which is a derogatory term in some parts of the world. The recording went viral, and contributed to Webb's narrow defeat of Allen.

Republican Tea Party-backed candidate Jamie Radtke stepped into the race in January, and she wasted no time criticizing Allen following his announcement.

"Senator Allen was part of the Washington establishment, and he still is," Radtke said in a statement Monday. "If we want to change Washington we need to change the people in Washington, and elect a new generation of strong leadership to the Senate who will make principled decisions. I look forward to proving I am that person for Virginia."