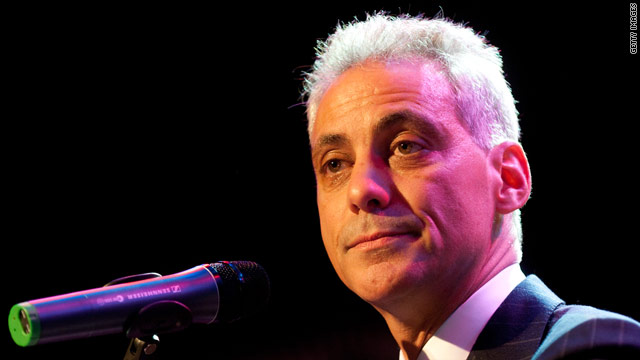 Emanuel files papers for a stay

(CNN) - Chicago mayoral candidate Rahm Emanuel's team filed papers Monday night with the Illinois Supreme court to request a stay to allow ballots to be printed with Emanuel's name on them, according to the court.

A Democratic source aware of the developments says the Emanuel campaign will file a petition with the state Supreme court on Tuesday asking for a leave which would then allow time to appeal. Wednesday the team would file the actual appeal and brief, which may be followed by a response from the Chicago Board of Elections on Friday.

The Chicago Board of Elections on Monday placed an order for the printing of two million ballots without Rahm Emanuel's name on them.

During a press conference following the Illinois appeals court decision, Emanuel emphasized his conviction to stay in the Chicago mayoral race.

"I have no doubt we will in the end prevail in this effort," Emanuel said. "As my father used to say, nothing is ever easy in life, this is just one turn in the road."

Emanuel was thrown off the ballot Monday by an Illinois appellate court panel, according to the Cook County Appellate Court's office.

The panel ruled 2-1 that Emanuel did not meet the residency standard to run for the city's top office.

"A candidate must meet not only the Election Code's voter residency standard, but also must have actually resided within the municipality for one year prior to the election, a qualification that the candidate unquestionably does not satisfy," the court stated in the decision.

In December, the Chicago Board of Elections determined he was a resident, but that decision was appealed. Emanuel served as President Barack Obama's chief of staff, a position he left last year to return to Chicago.

Emanuel is expected to appeal the decision to the Illinois Supreme Court, and a federal appeal could follow.

The source close to the Emanuel campaign told CNN his legal team anticipated there was a chance the court would rule against them and they have an emergency appeal already written.

Moseley Braun is expected to make a statement at 3:30 p.m. ET Monday.