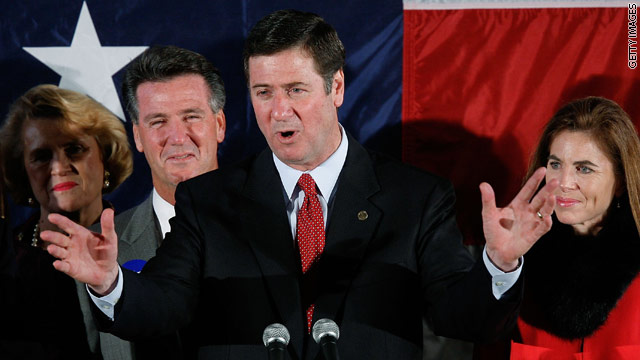 Washington (CNN) - GeorgeAllen.com says "stay tuned" right now, but later Monday expect the former senator from Virginia to use his website to announce a 2012 bid for his old job.

Allen is expected officially announce his candidacy in an email to supporters and by posting a video on his website, a source confirms to CNN.

But Democrats are not waiting for Allen's official announcement to criticize the former senator.

"George Allen's offensive macaca moment will be the least of his worries. Allen is a Republican establishment candidate who spent his years in Washington shilling for corporate interests, wildly spending taxpayer dollars, and racking up our national debt. We don't come across a lot of voters these days hungering for that type of experience," says a statement out Monday morning from Democratic Senatorial Campaign Committee communications director Eric Schultz.

The statement refers back to the infamous incident from the 2006 election that helped sink Allen's re-election effort. Allen, at the time a rising star in the GOP, was running for re-election to the Senate and was also considered a possible contender for the 2008 Republican presidential nomination. But at a campaign event where he was being recorded by a volunteer of his Democratic challenger Jim Webb, Allen called the person, who was of Indian descent, "macaca," which is a derogatory term in some parts of the world. The recording went viral, and was a contributing factor in Webb narrowly defeating Allen in November 2006.

Webb, a former Navy secretary in the administration of President Ronald Reagan, has not announced yet whether he'll run for re-election. Democratic National Committee chairman and former Virginia Gov. Tim Kaine has said he will not make a bid for the seat if Webb decides not to run.

Regardless of whether Webb runs, political handicappers give the GOP decent odds of recapturing the seat.

Virginia Democrats are also not waiting for a formal announcement by Allen to take a shot.

"George Allen spent six mediocre years in the Senate running for president and complaining about how bored he was. If he wins the competitive Republican primary, the people of Virginia will have a clear choice between his 'all hat no cattle' politics and Senator Jim Webb's substantive leadership on jobs, national security and criminal justice," says Brian Coy, Democratic Party of Virginia spokesman.

The statement highlights that Allen may not have a clear path to his own party's nomination.

Jamie Radtke, the head of the Virginia Tea Party Patriots Federation, has already announced her candidacy and has challenged Allen to debates. Corey Stewart, head of the Prince William Board of County Supervisors, and state lawmaker Robert Marshall, are also considering bids for the Senate.