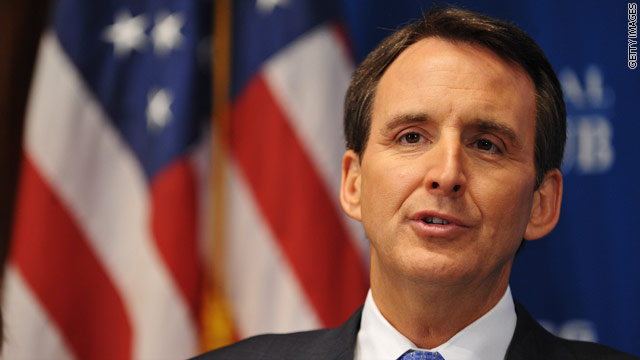 The former Minnesota governor is scheduled to sign copies of "Courage to Stand" in Manchester, New Hampshire, on Monday, as well as speak at a Merrimack County GOP dinner in Concord. On Tuesday, Pawlenty is the featured speaker at the "Politics and Eggs" speaking series event in Bedford, which is a must-do for any potential White House hopeful.

New Hampshire plays a crucial role in the race for the White House, as it traditionally holds the first primary in the presidential primary calendar. Pawlenty came in third in a straw poll Saturday of members of the New Hampshire State Republican Committee, who were gathered for their annual meeting. As expected, 2008 GOP White House hopeful and former Massachusetts Gov. Mitt Romney, somewhat of the hometown favorite, came in first, with 35 percent of the vote, followed by Rep. Ron Paul of Texas, who also ran in the last presidential election, at 11 percent, and Pawlenty at 8 percent.

Pawlenty's book tour takes him to another critical state next week. He will sign books in Ankeny, Iowa, on Sunday, followed by a speech to the Waukee Chamber of Commerce Dinner later that day. The following day he will sign books in West Des Moines. The Iowa caucuses kick off the presidential primary season.

Book releases and national tours have led to formal campaigns for many previous presidential candidates. Pawlenty finished up his second term as governor at the beginning of January. His announcement in 2009 that he would not run in 2010 for a third term as governor was the first serious indication that Pawlenty was considering a bid for the GOP presidential nomination.

But Pawlenty says the tour for "Courage to Stand" - which highlights Pawlenty's formative years growing up in the working-class town of South St. Paul, his political battles as governor of Minnesota and his vision for the country - is about promoting the book and not about launching a bid for the Oval Office. As for when he'll decide on a run for the White House, Pawlenty continues to say he'll announce a decision in a few months.