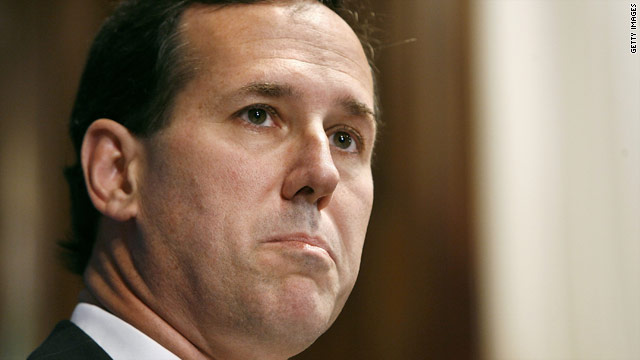 This follows a controversy sparked Thursday when the former senator made comments to CNSnews.com comparing abortion with slavery and criticizing Obama's stance on abortion. In the article Santorum explains the merit of his comments, stating that the president has "wrapped himself in the history and legacy of civil rights."

But in the scathing rebuttal to critics posted on the National Review's "The Corner" Monday, the former senator from Pennsylvania also lashed out against the "condemnation" he says he received "mostly, but not exclusively, from the left." And to those who thought their words would silence him, Santorum said they "obviously haven't done a Google search."

"Over a million lives will be taken this year, and a disproportionate percentage of these children will be black. How is this any less a civil-rights issue than any other issue we tie to civil rights?" Santorum wrote.

He further blasts Obama for education choices made for the first family.

"When we point out that our president does not allow the educational choice for poor black children in Washington, D.C., that he provides to his own children, does that make headlines?" he writes, continuing that his support comes from both sides of the aisle.

Citing first, Rev. Jesse Jackson: "In 1977, the Rev. Jesse Jackson wrote, 'I believe that life is not private, but rather it is public and universal. If one accepts the position that life is private, and therefore you have the right to do with it as you please, one must also accept the conclusion of that logic. That was the premise of slavery.'

He also sees support in President Reagan's writings: "In 1983 Pres. Ronald Reagan wrote: 'is is not the first time our country has been divided by a Supreme Court decision that denied the value of certain human lives.The Dred Scott decision of 1857 was not overturned in a day, or a year, or even a decade...'"

Santorum further compares Obama's response to the question of when life began as "above my pay grade" with Stephen Douglas, the Democratic presidential candidate who lost to Abraham Lincoln in 1860 and who, he wrote, had a "don't care" attitude toward the question of personhood for blacks.