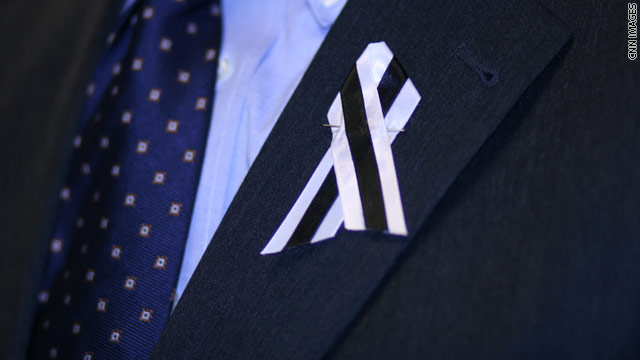 (CNN) - Members of Congress have been asked to wear black and white ribbons at the State of the Union address Tuesday in honor of the victims from the Arizona shooting, including Arizona Democratic Rep. Gabrielle Giffords.

In a letter, Representatives Debbie Wasserman Schultz, D-Florida, and Michael McCaul, R-Texas, encouraged members to wear the ribbons, which they said will be distributed by House pages to each Congressional office ahead of the address.

"It would be fitting that Members, Administration officials and others, wear these ribbons tonight as a symbol of solidarity with the community and the nation," the letter said. "The white ribbon represents hope for a peaceful, nonviolent society. The black ribbon is in remembrance of all who have died and been wounded as a result of violence."