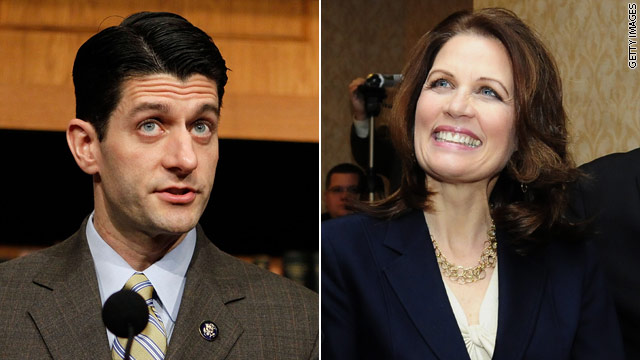 Previews of Republican State of the Union responses

(CNN) - Ahead of the Republican responses to the State of the Union Tuesday night, Rep. Paul Ryan, R-Wisconsin, who's delivering the official GOP response and Rep. Michele Bachmann, R-Minnesota, who's responding to the president from the Tea Party Express headquarters, released excerpts from their prepared remarks.

Rep. Gabrielle Giffords: "President Obama just addressed a Congressional chamber filled with many new faces. One face we did not see tonight was that of our friend and colleague, Congresswoman Gabrielle Giffords of Arizona. We all miss Gabby and her cheerful spirit; and we are praying for her return to the House Chamber."

Spending: "In one of our first acts in the new majority, House Republicans voted to cut Congress's own budget. And just today, the House voted to restore the spending discipline that Washington sorely needs. The reason is simple. A few years ago, reducing spending was important. Today, it's imperative. Here's why. We face a crushing burden of debt. The debt will soon eclipse our entire economy, and grow to catastrophic levels in the years ahead. On this current path, when my three children – who are now 6, 7, and 8 years old – are raising their own children, the federal government will double in size, and so will the taxes they pay. No economy can sustain such high levels of debt and taxation. The next generation will inherit a stagnant economy and a diminished country. Frankly, it's one of my greatest concerns as a parent – and I know many of you feel the same way."

Budget: "Americans are skeptical of both political parties, and that skepticism is justified – especially when it comes to spending. So hold all of us accountable. In this very room, the House will produce, debate, and advance a budget. Last year – in an unprecedented failure- Congress chose not to pass, or even propose a budget. The spending spree continued unchecked. We owe you a better choice and a different vision. Our forthcoming budget is our obligation to you – to show you how we intend to do things differently, how we will cut spending to get the debt down, help create jobs and prosperity, and reform government programs."

Fiscal challenge ahead: "Our nation is approaching a tipping point. We are at a moment, where if government's growth is left unchecked and unchallenged, America's best century will be considered our past century. This is a future in which we will transform our social safety net into a hammock, which lulls able-bodied people into lives of complacency and dependency. Depending on bureaucracy to foster innovation, competitiveness, and wise consumer choices has never worked – and it won't work now. We need to chart a new course."

"Stimulus": "The facts are clear: Since taking office, President Obama has signed into law spending increases of nearly 25% for domestic government agencies – an 84% increase when you include the failed stimulus. All of this new government spending was sold as 'investment.' Yet after two years, the unemployment rate remains above 9% and government has added over $3 trillion to our debt."

Health Care: "What we already know about the President's health care law is this: Costs are going up, premiums are rising, and millions of people will lose the coverage they currently have. Job creation is being stifled by all of its taxes, penalties, mandates and fees. Businesses and unions from around the country are asking the Obama Administration for waivers from the mandates. Washington should not be in the business of picking winners and losers. The President mentioned the need for regulatory reform to ease the burden on American businesses. We agree – and we think his health care law would be a great place to start. Last week, House Republicans voted for a full repeal of this law, as we pledged to do, and we will work to replace it with fiscally responsible, patient-centered reforms that actually reduce costs and expand coverage."

Debt Limit: "Whether sold as 'stimulus' or repackaged as 'investment,' their actions show they want a federal government that controls too much; taxes too much; and spends too much in order to do too much. And during the last two years, that is exactly what we have gotten – along with record deficits and debt – to the point where the President is now urging Congress to increase the debt limit. We believe the days of business as usual must come to an end. We hold to a couple of simple convictions: Endless borrowing is not a strategy; spending cuts have to come first."

Role of Government: "We believe government's role is both vital and limited – to defend the nation from attack and provide for the common defense … to secure our borders… to protect innocent life… to uphold our laws and Constitutional rights … to ensure domestic tranquility and equal opportunity … and to help provide a safety net for those who cannot provide for themselves. We believe that the government has an important role to create the conditions that promote entrepreneurship, upward mobility, and individual responsibility. We believe, as our founders did, that 'the pursuit of happiness' depends upon individual liberty; and individual liberty requires limited government. Limited government also means effective government. When government takes on too many tasks, it usually doesn't do any of them very well. It's no coincidence that trust in government is at an all-time low now that the size of government is at an all-time high."

Limited Government: "We need to reclaim our American system of limited government, low taxes, reasonable regulations, and sound money, which has blessed us with unprecedented prosperity. And it has done more to help the poor than any other economic system ever designed. That's the real secret to job creation – not borrowing and spending more money in Washington. Limited government and free enterprise have helped make America the greatest nation on earth."

"After the $700 billion bailout, the trillion-dollar stimulus, and the massive budget bill with over 9,000 earmarks that the President signed, many of you implored Washington to please stop spending money we don't have.

But, instead of cutting, we saw an unprecedented explosion of government spending and debt at President Obama's direction; unlike anything we have seen in the history of our country.

For two years President Obama made promises… He claimed that he would find solutions to fix our economy and help create jobs.

Well, here are a few suggestions:

The President could agree with House Republicans and commit himself to signing a Balanced Budget Amendment.

The President could also agree to an all-of-the-above energy policy whereby we increase American energy production, reduce our dependence on foreign oil, reduce the price of gas at the pump, and create good-paying jobs in the U.S.

The President could turn back some of the 132 regulations put in place in the last two years that each have an impact of $100-million or more on our economy.

Thanks to all of you, there's reason to hope that real spending cuts are coming. Last November many of you went to the polls and voted out big-spending politicians and you put in their place men and women who have come to Washington with a commitment to follow the Constitution and cut the size of government. And I believe that we are in the early days of a history-making turn here in the House of Representatives.

Last week we voted to repeal ObamaCare, and each day going forward, we must work hard to dismantle the massive government expansion that has happened over the past two years."

- CNN's Dana Bash and Deirdre Walsh contributed to this report