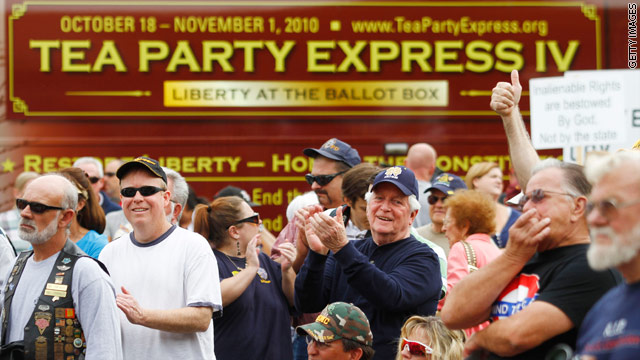 Tea Party leader: Tea Party 'is not a wing of the Republican Party!'

Washington (CNN) - Echoing comments from Rep. Michele Bachmann, the head of the Tea Party Express insists that the Minnesota Republican's response to the State of the Union is not meant to compete with the official Republican response from Rep. Paul Ryan of Wisconsin.

But Express Chairman Amy Kremer also emphatically told CNN on Tuesday that "the peoples' voices" need to be heard - and that the Tea Party "is not a wing of the Republican Party!"

An Express email, sent to reporters on Tuesday, blared out the headline: "Bachmann to counter Barack Obama – TONIGHT!"

Despite the hyped-up headline, Kremer insisted that Bachmann's Tea Party response is "being blown out of proportion" - and was not meant to take on Ryan.

"This has absolutely nothing to do with Paul Ryan," Kremer said.

It may not be personal with Ryan but there's no dispute the Tea Party Express wants to counter Obama's message Tuesday night independent of the GOP.

Kremer noted that she first approached Bachmann, either in November or December, about possibly speaking for Tea Party activists. The Express wanted someone closely aligned with the Tea Party movement to kick off its weekly broadcasts on TeaPartyHD.com, Kremer noted. She added that Bachmann's staff immediately liked the idea.

Kremer said that, when the idea was conceived, they did not know who would deliver a Republican response to the State of the Union.

At the same time, the carefully choreographed Tea Party response is designed to send another message to lawmakers.

"Our focus is to bring conservatives to Washington. Not Republicans," Kremer said.