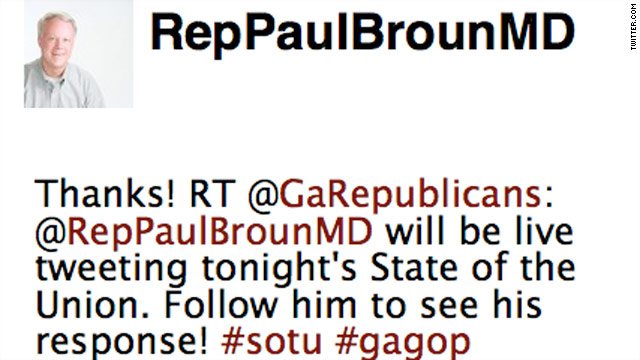 Rep. responds to Obama: 'You believe in socialism'

(CNN) – The State of Union address may have appeared to be a more civil affair to viewers at home, but at least one Republican congressman was launching some fiery rhetoric on Twitter as President Obama spoke.

Tweeting during the president's speech in the confines of his office, Georgia Rep. Paul Broun said at one point, "Mr. President, you don't believe in the Constitution. You believe in socialism."

The tweet was sent under the handle @RepPaulBrounMD, the account the congressman uses for his congressional duties. (Broun also has a separate account, @PaulBrounforGA, that he uses for political purposes.) The remark quickly circulated on Twitter, with some users comparing it to Rep. Joe Wilson's famous "You Lie" outburst two years ago.

Several of Broun's other instant responses to the president were also sharply critical:
"All children will be poor if we continue with Obama's policies #fb"

If the govt would get out of the way, we could have innovation and development"

A Broun spokesperson was not immediately available for comment. But according to Roll Call, the congressman has watched the last few State of the Union Addresses from his office so he can tweet during the debate.

Broun did part on a somewhat positive note, however: "Good speech-but long on hope and short on reality."