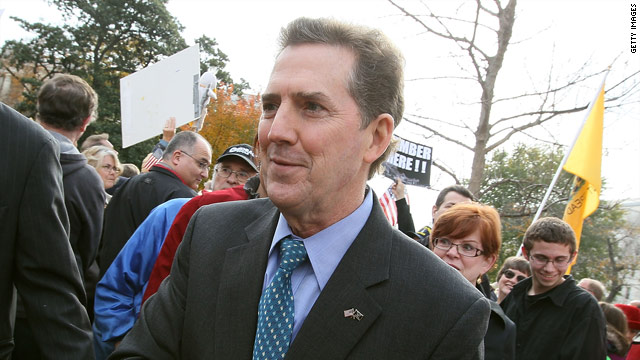 Washington (CNN) - News that South Carolina Sen. Jim DeMint will travel to Iowa on March 26 to address a conservative forum organized by Rep. Steve King is sparking another round of chatter that DeMint might launch a dark horse bid for the White House in 2012.

The Republican gadfly has been adamant in denying such intentions for more than a year – just Wednesday, he gave CNN's Wolf Blitzer a flat "No" when asked if he plans to seek his party's presidential nomination.

But the ground may be shifting in DeMint-world, and several of his closest advisers and political confidantes are now telling CNN that he is at least open to a presidential bid if a suitably conservative candidate fails to emerge from the early and wide-open GOP field.

"I think that you can read into it that he sees he has a role in the process and he hasn't completely shut the door," said one DeMint adviser asked about the Iowa foray.

DeMint currently sees his role in the 2012 process, the adviser said, as "setting the bar high" for the presidential contenders when it comes to advocating for a small government agenda.

"He hasn't completely shut the door on running, and if there is a massive void in the group of candidates, who knows what could happen?," said the adviser, who was quick to caution that there is only a five percent chance the senator will run.

Aside from Indiana Rep. Mike Pence, who is currently deciding between a presidential run and a gubernatorial bid in his home state, DeMint's advisers are having a difficult time envisioning a candidate that he could get behind.

DeMint may not endorse any presidential candidate this cycle, one adviser told CNN - a far cry from his 2008 strategy, when he endorsed former Massachusetts Gov. Mitt Romney early on in the process.

Some in DeMint's orbit been asking him to at least consider running for president as early as last year. Since November's elections, DeMint has been working on finishing a new book set for publication this summer, "The Great American Awakening: Two Years that Changed America, Washington, and Me."

Peter Brown, a prominent South Carolina donor and a member of DeMint's kitchen cabinet, predicted that DeMint could warm to the idea of a White House bid as the rest of the field takes shape. Brown said potential candidates like Romney, Sarah Palin, Mike Huckabee, Newt Gingrich are failing to generate any kind of broad excitement among conservatives.

"Over the next three months, I think Jim is going to be extremely frustrated with both the Republican Party and President Obama and the Democratic Party," Brown told CNN. "The only reason Jim might consider running for president is because he will realize the momentum of the November elections has died."

If he did run, DeMint would enter the race with certain advantages. He developed a national following among conservative activists during the 2010 midterm elections as he endorsed and raised money for a number of Tea Party-aligned Senate candidates – a network he would be able to tap for money and support.

Ovide LaMontagne, who sought the GOP nomination for Senate in New Hampshire with DeMint's support last year and is now looking for a candidate to back in 2012, welcomed the news the DeMint was heading to Iowa.

"It's exciting to think that he might actually be serious about exploring a run," LaMontagne told CNN. "This is going to be a wide-open primary. There is definitely room for someone with the record and commitment to the conservative principles as Jim DeMint. I hope he will contact us and come to New Hampshire."

Another leg-up for DeMint: he hails from a state that happens to be host one of the four crucial early caucus and primary contests, making him the all-but-certain frontrunner for delegates there. (That could also have the negative effect of minimizing the state's role in the process by forcing other candidates to skip the South Carolina completely.)

"He would certainly be the odds on favorite here," said Terry Sullivan, a South Carolina GOP consultant and longtime DeMint adviser. "He wouldn't be slam dunk, but he is definitely the favorite."

Sullivan stressed that while DeMint "doesn't want to run" for president, he is nevertheless considering a bid.

"The party is kind of lost, people are pulling it in different directions," Sullivan told CNN. "There is no one that can break through and clearly identify a direction for the party. It's certainly something he is not going to close the door on until he finds a candidate."

Another of DeMint's confidantes said that the Senator's commitment to promoting conservative ideals – "which runs to his core" - could compel him to enter the race. DeMint does not want to run, this adviser said, but added: "You've got to have a messenger."

"Senator DeMint has absolutely no plans to run for president. He's going to Iowa to talk about the conservative agenda - nothing more, nothing less," Hoskins said in an email.