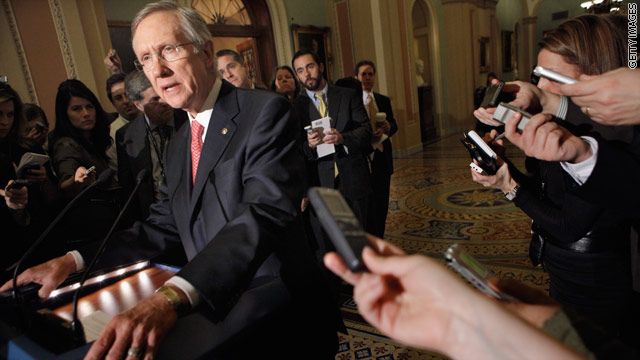 Reid to Obama: 'Back off' on earmarks

(CNN) – Freshly reelected to another six-year term, Senate Majority Leader Harry Reid isn’t holding back fire when it comes to his disagreements with President Obama over a ban on earmarks.

“This is an applause line,” the Nevada Democrat told NBC News Wednesday regarding Obama’s pledge not to sign a bill with earmark spending in it. “It’s an effort by the White House to get more power. They have enough power as it is.”

The comments come a day after the president’s State of the Union address, during which he said, “Because the American people deserve to know that special interests aren't larding up legislation with pet projects, both parties in Congress should know this: If a bill comes to my desk with earmarks inside, I will veto it.”

Reid maintains the president’s pledge will not reduce the deficit but instead seizes power traditionally delegated to the Senate. Most Republicans support the pledge, but several Democrats have also expressed disagreement with the president, noting the money will be spent one way or another.

“The money is going to be spent anyway,” said Reid. “The difference is the White House is going to be directed where its spent, not us. That’s our obligation. This does not save any money.”

According to the nonpartisan fact check.org, the vast majority of earmarks direct federal agencies how to spend their previously-approved budgets, rather than create new spending projects.

Added a visibly frustrated Reid, "I have a constitutional obligation to do congressionally-directed spending. I know much more what's needed in Elko, Nevada . . . than some bureaucrat does back here."

Reid, himself a former boxer who has always been quick with fighting words, added the president needs to “back off” this argument.

“The American public should understand, and I am sure they will as time goes by, that the president has enough power. He should just back off. He’s get enough to do without messing in what we do.”