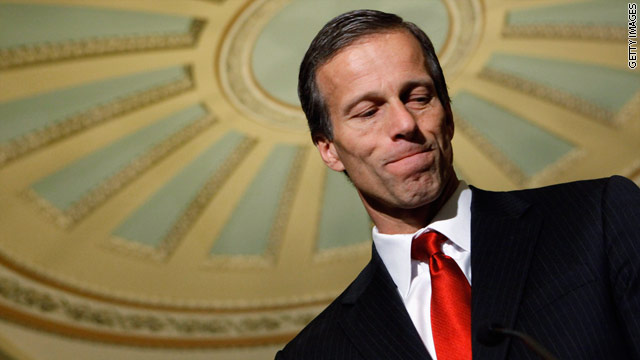 Thune getting closer to presidential decision

(CNN) – To those keeping a list of when potential presidential candidates are going to announce their intentions, pencil South Dakota Sen. John Thune in at the end of February.

Thune, who rivals Mitt Romney in the I-look-like-a-president category, told conservative radio host Hugh Hewitt Wednesday he will decide by the end of February.

"I've told people I don’t have a definite timeline or deadline out there, but it strikes me, at least, for somebody like myself who’s not known, and would have to work a lot harder at getting known,” said Thune.

Several recent polls show Thune among the bottom of the presidential pack, a reflection of the South Dakota senator’s little name recognition beyond his home state.

So when can we begin to see the ball rolling on Republican primary campaigns?

Here’s CNN’s round up of those who have given hints:

Mitch Daniels: “Before May”

Mike Huckabee: No decision until the summer

Sarah Palin: Not ready to make an announcement

Tim Pawlenty: In the coming months

Rudy Giuliani:  “Evaluate… as the year goes along”