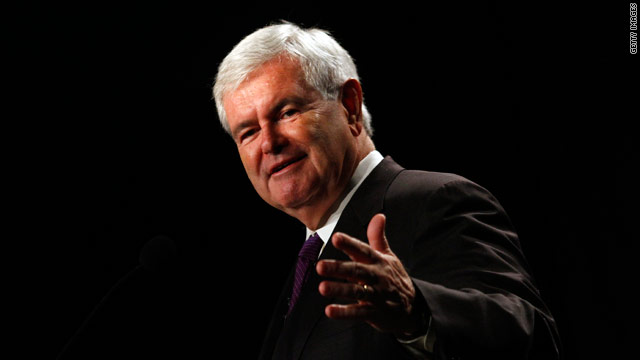 Washington (CNN) – Republican Newt Gingrich touched down in Ohio Friday on the heels of a trip to early-primary-Iowa on Tuesday, both trips that indicate strong interest in the upcoming presidential race.

Though the former speaker of the house isn't shy about discussing a presidential bid, he did his part to temper expectations about his potential candidacy. In a phone interview Wednesday with the Columbus, Ohio, newspaper, The Dispatch, Gingrich revealed that he's been talking to voters in early primary states "to see if there is a realistic possibility" that he can win the GOP nomination next year, but admitted that he trails three other possible Republican contenders.

Though several GOPers have openly considered a 2012 presidential bid, none have made an official announcement to date.

Gingrich traveled to Ohio, in part, to screen "Nine Days That Changed the World," a film co-produced and co-narrated by him and his wife Callista, and to participate in a discussion on the environment. He has recently spoken on his idea to replace the U.S. Environmental Protection Agency with an "environmental solutions agency" that has "a collaborative attitude toward the states."

Gingrich is scheduled to travel to at least two more states that hold early presidential primaries, New Hampshire and South Carolina, in the coming weeks.