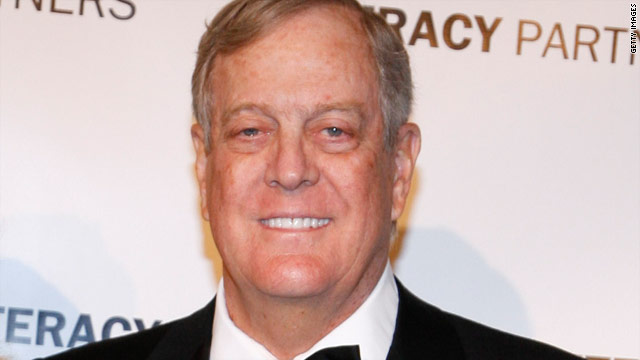 Washington (CNN) - This weekend, at a posh resort near Palm Springs, California, two billionaire corporate titans will convene a semi-annual meeting of a politically well-connected set. It will include wealthy donors and powerful Republicans, including House Majority Leader Eric Cantor.

At David and Charles Koch's meeting, attendees will discuss items like how best to promote free markets and how to help elect conservatives. Donors are expected to be asked to donate to conservative causes.

It will be conducted virtually in secret, with no press or public allowed and many attendees keeping event details on the hush.

That's fueled criticism that this gathering is a sort of secret cabal - a "Billionaires Caucus," critics say. Robert Reich, former Labor Secretary in the Clinton administration, even said that the Koch brothers' meeting represents "a threat to our democracy."

Those and other criticisms were leveled during a Thursday telephone press conference for reporters organized by the liberal-oriented, nonprofit group, Common Cause. On Sunday, the group will hold events to counter the Koch's weekend conference: hosting a panel discussion titled, "Uncloaking the Kochs" and spearheading a protest rally, both near the Rancho las Palmas resort, the site of the Koch meeting.

A central issue inflaming this debate: the role of corporate money in politics, especially after last year's landmark Supreme Court campaign finance ruling. That decision, in Citizens United v. Federal Election Commission, found that the "government may not suppress political speech on the basis of the speaker's corporate identity."

During the telephone press conference, Reich said that decision "opens the floodgates to any amount of money by corporations and rich individuals" to be used in the political system - echoing the sentiment of many others. And many of them, Common Cause included, accuse the Koch brothers of funding a conservative political network to advance their corporate interests and political beliefs.

Koch Industries is the second largest privately-held company in the United States. It's based in Wichita, Kansas, and is involved in industry areas such as energy, fibers, and chemicals, among others.

"Those that are attending the conference believe that everyone benefits from the prosperity that emerges from free societies," Pfotenhauer said. "This gathering is meant to discuss strategies for promoting policies that will help grow our economy, foster free enterprise and create American jobs."

The Koch Foundation is one of many donors to The Heritage Foundation. Rory Cooper, director of communications for Heritage, reacted to the criticism of the Koch meeting - though he explained his group has nothing to do with it.

"I don't understand the criticism of people getting together and talking about politics and governance," Cooper said. "I think a lot of the people who I've seen, making those statements, so far, have been people who are not transparent in their own regards. So I think that there's certainly a great deal of hypocrisy here."

This issue of transparency - of who's disclosing what - also enflames the debate.

Common Cause's effort to "Uncloak the Kochs" stems from their claim that the brothers are secretly funneling money into efforts that will, eventually, advance their interests. Van Jones, senior fellow at the Center for American Progress, partly put it this way: "They are the King Kong and Godzilla of bad policy, trampling through our democracy. And they must be exposed and they must be stopped."

"For more than 40 years, these brothers have been open and steadfast proponents of individual and economic freedom," it states. "Through their personal involvement and private foundations, they have lawfully supported activities and causes consistent with their beliefs."

Meanwhile, the Center for American Progress also faces questions about its political ties and level of donor transparency. Its president and chief executive officer is John Podesta, former chief of staff for President Bill Clinton and an ally to the Obama White House.

As for donors, there are questions about who donates to the Center for American Progress - some accusing the group of keeping its donor list secret.

When pressed on this point by CNN, the group would only reiterate its "concern with the Kochs."

Common Cause, which faces the same question, responds differently.

"We are revealing our donors," Bob Edgar said. "If you contact us, you can have access to that. We have strict policies of sharing that information. You just need to contact us."

Meanwhile, as liberal or Democratic-aligned groups play up the Koch brothers' ties to conservative groups - others say it's not much different from what progressive organizations do.

Conservative critics often cite wealthy donors, like billionaire George Soros, who help fund liberal groups, like the Democracy Alliance. And they say what Soros and liberals are doing is not much different than what the Kochs and other conservatives are doing: promoting their political beliefs.

Participants in Thursday's telephone conference call vehemently outlined what they see as differences.

Edgar of Common Cause said: "It's not millions of dollars, it's billions of dollars available to them. It's the size of their reach. A few years ago, there was an analysis done of how much the radical right has invested in trying to shape policy versus all of the progressive, liberal organizations. The difference in volume and amounts of resources is very different."