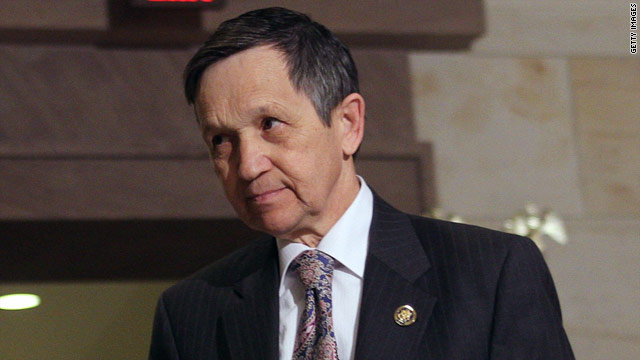 Washington (CNN) – Democratic Ohio Rep. Dennis Kucinich has settled his $150,000 lawsuit against the House cafeteria responsible for serving him with a pitted olive, and along with it, a broken tooth.

Citing the "clamor for information," Kucinich released a detailed account of his dental ordeal complete with descriptions of the split tooth, excruciating pain and "numerous dental visits."

In a letter e-mailed to his campaign listserv and posted on his website, Kucinich explained balking at initial requests for such information stating, "Thought I would prefer to focus your attention on my work dealing with the profoundly important issues that face our nation … Given the degree of public interest you should know some details." He also recounts a reluctance to "trying the case in the media."

According to Kucinich, the pit sparked a chain of events that involved "three dental surgeries," "six replacement teeth" and "a substantial amount of money to rectify."

And he didn't have the help of insurance. "To clarify, no dental expenses were covered by any health plan, nor did I have dental insurance that covered the injury."

The Ohio Congressman expressed his satisfaction in the resolution of the matter with the cafeteria located inside the Longworth Office Building, saying, "The parties have exchanged information and after some investigation and discussion have resolved … for an amount all parties believe reflects the actual out-of-pocket expenses … I don't want to have to make another dental visit for a very long time, and will be making no further comment on this matter."