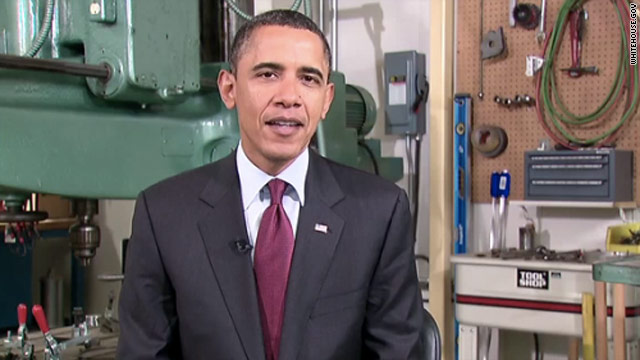 Obama outlines how to 'win the future'

Washington (CNN)- Echoing his recent State of the Union remarks, President Barack Obama used his weekly address on Saturday to detail a major theme from the speech: how America can "win the future."

Obama delivered the weekly address from a revitalized factory in Manitowic, Wisconsin that builds advanced clean energy systems. He pledged to continue "shining a spotlight" on similar businesses and "innovators across America," because "that's how America will win the future-by out-innovating, out-educating, and out-building our competitors."

The president also emphasized education as a way to "light the spark in the minds of innovators" and affirmed the need to "cut wasteful spending" in order to "eliminate what we don't need to pay for the investments we need to grow."

Obama outlined his plans for a successful future that include promoting innovation and a focus on clean energy, saying "I've set this goal for America: By 2035, 80 percent of electricity should come from clean energy."

"This is going to lead to good, new jobs. And that's how we win the future-by unleashing the talent and ingenuity of American businesses and American workers in every corner of this country."

Republican Senator Ron Johnson of Wisconsin gave the Republican weekly address from an alternate perspective. With a focus on limited government, Johnson asserted that "big government is blocking job creation."

The freshman senator drew from his background in manufacturing and opened his remarks by sharing his motivation for coming to Washington.

"We are bankrupting America," he said, "And I thought it was time for citizen legislators to come.help those individuals already here that are seriously facing that reality."

Johnson cites "huge deficits, slow economic activity, high unemployment, and woefully inadequate job creation" as symptoms of the larger problem of "the ever expanding size, scope, and cost of government."

Describing the results of the stimulus bill as "pitiful," Johnson recommends that "growing government does not grow out economy.It is the private sector that creates jobs." He also called for the president to "present a serious plan" to control government spending and the deficit, and expressed confidence that Republicans will be "willing to help him get it passed."

"The issues of spending, deficits, and the debt will be central in the upcoming debate over the 2011 spending bill and the need to raise the debt ceiling," he continued. "This will be the moment of truth when talk and rhetoric must be turned into action and tangible results."

Invoking the "belief in the power of the free market system" and "vision of a limited government" held by "our founding fathers," Johnson asserted, "It is our turn to act responsibly."