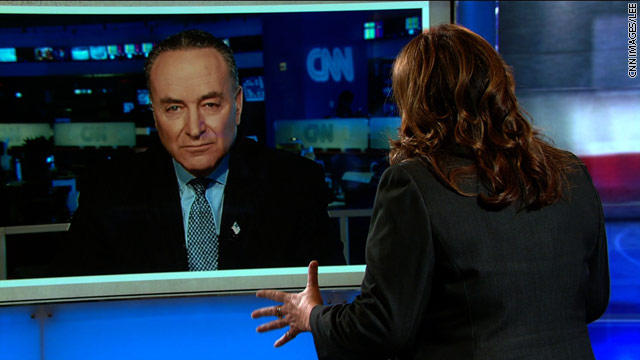 Washington (CNN) - Members of Congress on both sides of the aisle recognize the importance of fixing the country's fiscal house, but deep divides remain over the two major economic issues currently before Congress, a new budget and the debt ceiling.

Democratic Sen. Chuck Schumer, D-New York, said Republicans are "playing with fire" by threatening to shut down the government and warned of dangerous consequences if Congress allows the spending bill that is currently funding the government to expire.

"To just stay in your corner and say it's my way or I'm shutting down the government, that could lead to terrible, terrible problems," Schumer said Sunday on CNN's "State of the Union."

But Republicans argue that immediate and significant budget cuts are necessary, and that they will push hard to make that happen as soon as possible. Their first chance will be the March 4 expiration of the current appropriations resolution that provides money to keep the government operating.

Speaking on "Fox News Sunday," House Speaker John Boehner said Americans "are not going to allow us to move ahead if we don't put real budget controls in place."

On the issue of the debt ceiling, Schumer said credit markets will lose confidence in the U.S. Treasury if Congress does not raise the ceiling.

Boehner agreed that the possibility of the United States defaulting on its debt could mean "financial disaster," but that he would only "tolerate" an increase in the debt limit if the Obama administration made cuts in spending.

"You can't create jobs if you default on the federal debt," Boehner said. "The American people will not tolerate our increasing the debt limit without serious reductions in spending."

A vote on raising the debt ceiling – the legal amount the U.S. government is allowed to borrow to finance its debt – looms in Congress to avoid defaulting on the loans. Treasury Secretary Timothy Geithner has said the U.S. could hit its current ceiling of $14.3 trillion, set last year, by the end of March.

President Barack Obama and his administration have expressed concern if Congress does not raise the debt limit, and Republicans have demanded spending cuts before they will agree to a vote on the debt.

House Majority Leader Eric Cantor, R-Virginia, said the House will take up the issue of spending levels during the week of February 14, a date Boehner reiterated Sunday.

Senate Minority Leader Mitch McConnell, R-Kentucky, did not take the possibility of a government shut-down off the table, but he tried to cast the upcoming fiscal battles in Congress as "opportunities."

"We have two opportunities to do something important for this country on the issue of spending and debt," McConnell said on NBC's "Meet the Press." "We ought not to lose that opportunity. The president ought to work with us on both those occasions to address that important issue."