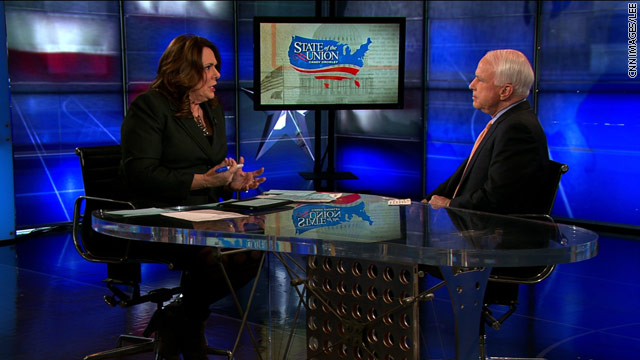 Washington (CNN) - Arizona Republican Sen. John McCain said Sunday that Egypt has an opening for democratic leadership amid the chaos of the ongoing protests.

"All of these rights that individuals have are not confined to the United States of the America and our allies," McCain said on CNN's "State of the Union." "I still think that we have a real opportunity to see a democratic transition."

McCain, who serves as the ranking member on the Senate Armed Services Committee, said Egyptian President Hosni Mubarak knows what's going on in his own country, and that it is up to the United States to be a "helpful, assisting but insisting partner" to the country.

"We cannot afford a Tiananmen Square in Cairo," McCain told CNN Chief Political Correspondent Candy Crowley, in reference to the 1989 pro-democracy movement that was crushed in China.

President Obama needs to "lay out a scenario of what we think the Egyptian people should have every right to expect," he said.

Democratic New York Sen. Chuck Schumer said the army's involvement on the ground in Egypt is a positive sign.

"My hope is that Egyptian politics - which has tended to be secular, certainly wanting more rights and deserving more rights, both economic and political - takes root in that country now and maybe we're at the time where it can," Schumer said.