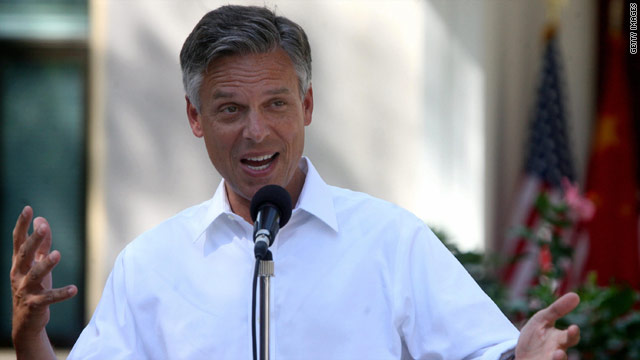 'A lot of room' for Huntsman in GOP race, adviser says

Washington (CNN) - Much of the talk swirling around the possibility of Jon Huntsman presidential bid in 2012 has centered on whether a perceived moderate Republican can survive the conservative gauntlet of a GOP primary.

The latest round of buzz kicked up again on Monday after the Obama administration leaked word that Huntsman will resign as U.S. Ambassador to China in the next few months to pursue a presidential bid. An administration official confirmed that thinking to CNN.

But Republican strategists backing Huntsman - a former Utah governor now serving as U.S. Ambassador to China - say there is room for a "center-right" presidential candidate as the rest of the early GOP field races to the right.

"Everybody is gaming out 2012 as if it will be 2010, and it's not," said one Republican laying the groundwork for a Huntsman bid, should he decide to enter the race.

The adviser stressed that Huntsman is not involved in the details of setting up a potential campaign.

"There is a lot of room on the center-right side of the aisle for Jon," the adviser said. "But he isn't going to take a back seat to anyone. He cut taxes and cut spending as governor and had a free-market based health care plan, unlike Obama and Romney. And he is pro-life and pro-Second Amendment."

The adviser added that Huntsman's perceived squishiness on other topics - along with working for President Obama, he broke with his party on flashpoint issues like civil unions and climate change while governor - could be an asset in New Hampshire's first-in-the-nation presidential primary, which allows independents to cast ballots.

Another Republican strategist who has met privately with Huntsman about a possible White House bid said his impressive private sector resume and movie-star good looks called to mind former Massachusetts Gov. Mitt Romney, but the strategist said Huntsman is "more authentic than Romney."

Huntsman, a fluent Mandarin speaker dating from his experience as a Mormon missionary, would bring considerable foreign policy credentials to a field full of GOP governors, as well as a hefty personal fortune from his family's chemical business that could make him competitive beyond the early caucus and primary states.

A Republican familiar with the Huntsman effort told CNN that his advisers plan to survey the presidential landscape at some point in June or July, and then make a recommendation as to whether or not he should seek the nomination.

Huntsman backers have set up a political action committee - "Horizon PAC" - that will be headed by Florida Republican strategist Susie Wiles.

In February 2009, before Huntsman took the China posting, Quinn arranged for the then-governor to meet with a group of influential South Carolina Republicans in Columbia. Quinn came away impressed and said Monday he is on board should Huntsman become a candidate.

"John [Weaver] and I talked and he told me that he thought there was at least a shot that Huntsman might be interested in a candidacy in 2012," Quinn told CNN. "All I know that if he does run, I think he would be an excellent choice. I stand ready to help if he runs."

President Obama, meanwhile, praised Huntsman's work in China at a press conference earlier this month but also joked about the ambassador's chances of securing the nomination after working for a Democratic president.

"I'm sure that him having worked so well with me will be a great asset in any Republican primary," Obama said.