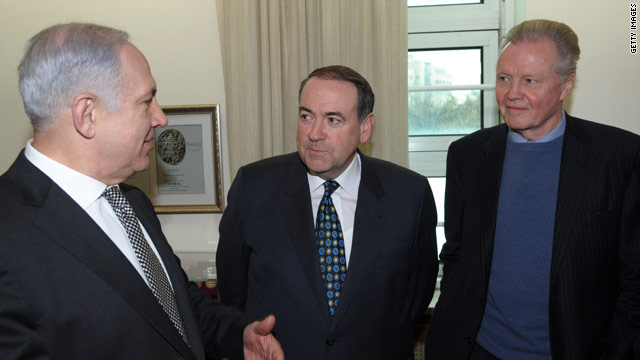 Huckabee and Voight in Israel

Huckabee, whose visit to the country comes only days after potential-rival Mitt Romney made a similar foray to the powerful United States ally, tweeted a photo of himself meeting with the prime minister earlier Monday. Also along for the ride is actor and conservative activist Jon Voight.

According to the Jerusalem Post, Huckabee addressed the controversial issue surrounding the disputed West Bank, saying, "It is inconceivable in many ways that we would have to even argue and debate whether or not Israelis could live in Israel, not just in parts of Israel but anywhere in Israel they wished to live."

"I cannot imagine as an American being told that I could not live in certain places in America because I was Christian, or because I was white, or because I spoke English. I would be outraged if someone told me that in my country, I would be prohibited and forbidden to live in a part of that country, for any reason," said Huckabee.

The Obama administration had attempted to convince Israel to slow down development in the West Bank as a precondition to the peace process negotiations with the Palestinian Authority. However the White House backed off that demand in December.