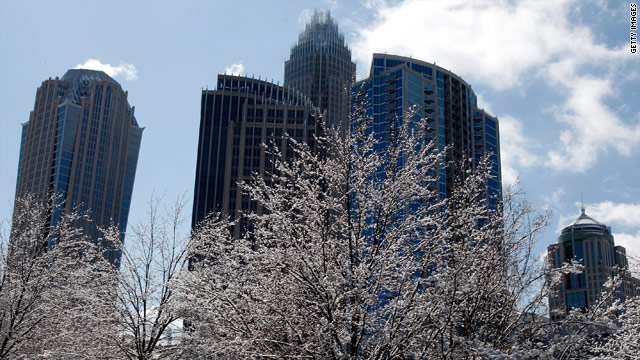 Charlotte was one of four cities vying to host the convention where the Democratic Party will nominate President Barack Obama for a second term. Cleveland, Minneapolis and St. Louis were all in contention to host the event, which is expected to have a major economic impact on Charlotte and the surrounding metropolitan area.

"All the contending cities were places that Barack and I have grown to know and love, so it was a hard choice," first lady Michelle Obama wrote Tuesday in an email to her husband's political supporters. "But we are thrilled to be bringing the convention to Charlotte."

The Democratic National Committee estimated that the economic impact on the 2008 convention city, Denver, was $160 million. At that time, the DNC also noted that 50,000 additional people visited that city because of the convention.

The 2012 Democratic convention is scheduled to take place the first week in September.
DNC Chairman Tim Kaine, in an email Tuesday to DNC members, said Democrats had "some great choices" to pick from to hold the 2012 convention.

"There were many cities eager for the opportunity to host our convention, and we are thankful for their participation throughout the year," Kaine wrote. "The bid process was thorough. Our Technical Advisory Group conducted extensive site visits, and our allies and political leaders offered lots of important input.

"After reviewing feedback from all these individuals, I am confident that Charlotte is an ideal location"
Not everyone was happy with the DNC's decision. St. Louis Mayor Francis Slay suggested that Obama's re-election effort was a major point in the DNC's reasoning to choose Charlotte.

"St. Louis was not selected for 2012 for reasons of electoral politics," Slay contended in a post on his 'Mayor's Blog.' "That is a decision of the President and his reelection team. I will not fault it. St. Louis will submit a bid for a 2016 national political convention, when the electoral politics will be different.

"Thanks to all who helped put together a strong DNC bid. We just aren't the South."

The Republican Party last summer chose Tampa to host its presidential nominating convention, which will take place the last week in August.