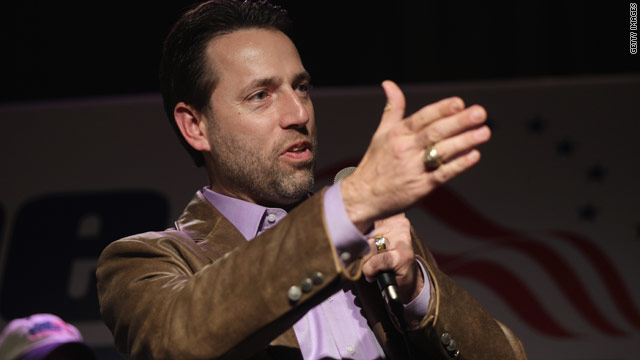 According to paperwork filed Monday with the Federal Election Commission, his campaign war chest is fairly well-stocked one month after the Alaska Supreme Court declared Republican incumbent Lisa Murkowski the winner of Alaska's U.S. Senate race.

Miller's made no secret that he won't be a stranger to politics, saying in his farewell remarks "This is not the beginning of the end. This is the end of the beginning" and "Where corruption and complacency threaten to weaken [the Constitution], I will draw the lines of battle and step into the breach. I would ask those who believe in these principles, and share this love of liberty, to step with me." So the question is: where will he step next?

On Sunday he took aim at incumbent GOP Congressman Don Young who is up for re-election in 2012. In a surprising move, Miller voiced his support for campaign-rival Murkowski, and his disapproval of Young's endorsement of a controversial bill.

That bill is called Sealaska. Last session, it was co-sponsored by both Murkowski and Young in the Senate and House, respectively. But Murkowski has backed off and will hold "listening sessions with the affected communities in southeast Alaska before moving the bill forward again," according to statements that her spokesman on the Energy Committee, Robert Dillon, made to Alaska's NPR affiliate KCAW-FM. On the other hand, the station reported that Young is moving ahead with plans to bring the original bill to the floor during this session.

Miller lauded Murkowski for her move: "It is encouraging that Senator Murkowski has agreed take another look at those portions of the bill that have stirred up so much controversy."

The controversy centers on provisions in the land bill that change the property native peoples can select from the federal government as obligated under the Alaska Native Claims Settlement Act. Opponents of the bill are wary of public lands being given over to private corporations and are concerned about loss of access to public areas if they are moved to private ownership. They also protest the power that the bill gives Sealaska to select land that is different from lands that it currently has access to.

Miller continued blasting Young: "However, I am very concerned with the fact that Rep. Young apparently hasn't been listening. I hope he will follow Senator Murkowski's lead and take all of the interests of the region under advisement before putting his bill forward."

The Sealaska Bill is a land bill that would change the property that the Southeast Regional Native Corp., a corporation that represents Alaskan natives in the southeastern region of Alaska, can select from the federal government as obligated under the Alaska Native Claims Settlement Act.

If taking Young's seat is Miller's goal, the incumbent isn't losing sleep over it. When asked about a possible Miller candidacy during an interview with Alaska local television's KTVA he said "I think Joe's a little old for the job. You have to be committed to the job of House of Representatives, you can't use it as a springboard to run for the senate because not only do I think that's dishonest but the only thing a house member has is longevity, so you have to have somebody committed."

And for Young, the ideal candidate is, well, young. He says the best person to run is "preferably somebody between the ages of 26 and 35…you should actually sign a contract - I will serve at least 25 years."

Should Miller keep his eye on the prize of a Senate seat, Democrat Mark Begich is up for re-election in 2014.