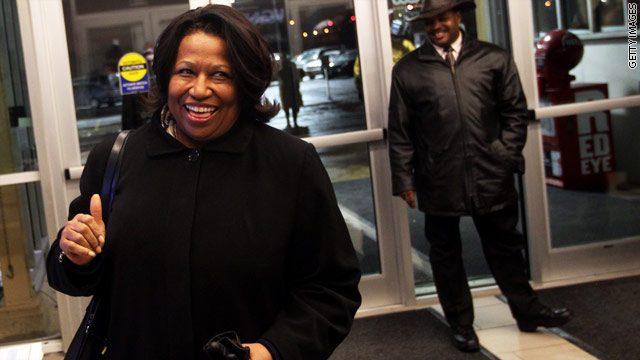 This comes after the two women exchanged fiery words on Sunday – with the former senator accusing her opponent of previously being "strung out on crack." Moseley Braun later apologized for the remarks.

But in a statement posted Wednesday on Patricia Van Watkins' website the candidate said: "Over the last few days, people across the city have shared their concerns about Carol Moseley Braun's volatility and insensitivity to the lives and challenges of so many Chicago families. Today, with a host of supporters by my side, I have called for Carol to step out of this mayoral race."

CNN reached out to Moseley Braun's campaign but did not receive a response.

On Tuesday, Moseley Braun retreated from the comments that sparked the controversy. They were made to Watkins at a weekend candidate forum - that did not include leading mayoral candidate Rahm Emanuel - at a Chicago church on the city's south side.

"I want to apologize to her, to the congregations and members of Trinity United Church and of New Pilgrim Missionary Baptist church and to all of the families and friends of those who are or who have been caught up in the tragedy of drug use," Moseley Braun said to reporters in Chicago.

According to media reports, Watkins, who badly trails the other candidates, was initially more forgiving of Moseley Braun saying on Tuesday: "Though I accept Carol's media-issued apology, I believe she should seek sensitivity counseling and make restitution by volunteering at a recovery house as soon as possible. Carol's reckless comments reveal her detachment from the experiences of the majority of Chicago families who just need a second chance."

The episode began at the Sunday event after Watkins accused Moseley Braun of being "missing in action" from the community for the past 20 years.

Visibly angered, Moseley Braun explained why, she felt, Watkins was unaware of her service to Chicago.

In a recent interview with Chicago Magazine, Watkins admitted having a problem with drugs as a teenager.

Voters will cast ballots in the Chicago mayor's race on February 22.