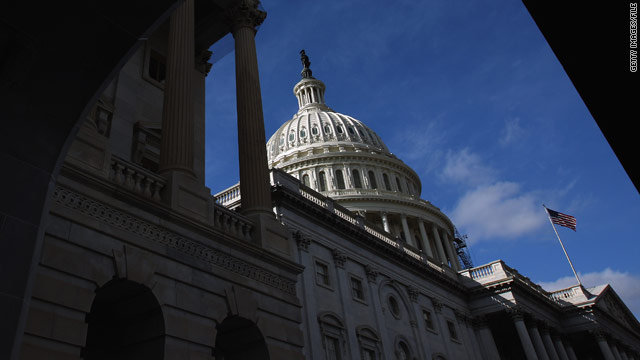 But as one reporter aptly noted to the leaders, it is the Democrats talking most about shutting down the government.

The reason for the Democratic talking point is politically obvious. Republicans were punished by voters when they controlled Congress in 1995 and a spending fight with a Democratic president led to a government shutdown.

And Democrats are about to enter their first intense struggle with newly empowered Republicans over spending cuts – the issue the GOP believes it was elected to address.

A so-called continuing resolution that passed late last year to keep the government running expires on March 4, and GOP leaders have made clear they want to begin to slash spending then.

"Every week they keep upping the ante and proposing extreme cuts, and then they say if you don't do it our way we're going to shut the government down and hurt millions and millions of innocent people and at the same time, risk the credit rating of the United States," said Schumer.

"Just at the time when we have a crisis in Egypt and tension in the Middle East, in Lebanon and other places, just at a time when our troops are on the ground in Afghanistan and Iraq and other places, a government shutdown, if anything, as it relates to our national security, would be a benefit to our enemies," raised Sen. Bob Casey, D-Pennsylvania.

Democrats insisted that even the notion of a potential government shutdown over a spending fight will rattle an already fragile economy.

A spokesman for Senate Republican leader Mitch McConnell dismissed the news conference, led in part by Schumer, as a political stunt.

"It is our hope that he [Schumer] soon realizes the only person talking about a shutdown is Senator Schumer. Most Americans and even many in his own party have come to realize that the gravity of our current fiscal problems calls for constructive dialogue that will lead to serious cuts in spending and debt. That's what Republicans are focused on. We hope Senator Schumer joins that bipartisan effort so," said Don Stewart, spokesman for McConnell.

So, is there middle ground on the issue of spending cuts?

Senate Majority Leader Harry Reid said Democrats realize there has to be some "long-term austerity here in the United States...we're not burying our heads on the sand, we realize we're going to have to do some things, but we're not willing to play Russian roulette."

But after the news conference ended and senators put away their talking points, Dick Durbin, the No. 2 Democrat in the Senate, admitted to reporters that Democrats do have to face the fact that spending cuts will be necessary.

"I think we're going to end this year with some spending cuts. Let's do it in a sensible fashion so we don't kill the recovery and we don't stop the basic services of government," said Durbin.