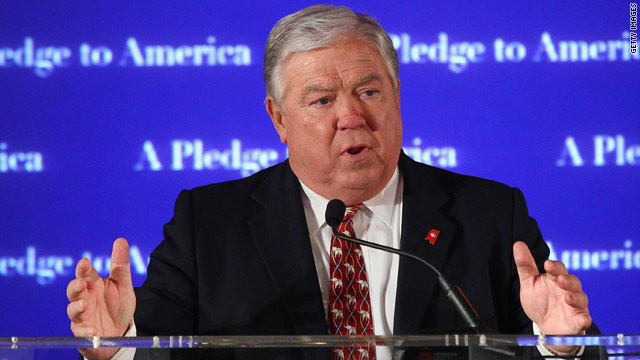 Barbour adviser: 'He’s running until he says he’s not'

Washington (CNN) - Mississippi Gov. Haley Barbour is increasingly likely to embark on a campaign for the GOP presidential nomination in 2012, a source close to the Republican told CNN Friday.

“We have definitely shifted gears, there is no question about that,” the source said. “He's running until he says he's not.”

That Barbour is seriously thinking about a White House bid is hardly a surprise. He built up his profile substantially during the 2010 election cycle as chairman of the Republican Governors Association and recently spent time in the early primary state of South Carolina meeting with GOP donors and activists.

Barbour has a national network of support dating to the 1970s and 80s, when he worked as a political strategist and served in the Reagan White House. He went on to start a successful Washington-based lobbying firm and, later, served as chairman of the Republican National Committee.

But people close to Barbour are now operating on the assumption that he will run.

The governor has started to call in some of the chits he collected during his long political career, soliciting support from donors and political consultants in several early nominating states.

“He is doing the things you have to do” to gear up for a presidential bid, said the source.

Barbour recently made a speaking appearance before Republican activists in Florida, an important state for any potential presidential candidate, and he is planning forays into other key states in the coming weeks.

And in an effort to bone up on his foreign policy chops, Barbour is traveling to Israel this weekend to meet with Prime Minister Benjamin Netanyahu and other government officials. Next week, he will address the Conservative Political Action Conference along with several other potential 2012 contenders.

In describing the governor’s reasons for thinking seriously about a presidential bid, the adviser pointed to Barbour’s work trimming the Mississippi budget and his efforts after Hurricane Katrina.

“Bold leadership is required to get us off the path we are on in this country,” the source said. “It’s going to take somebody who is willing to make some hard decisions, to provide some authentic leadership.”