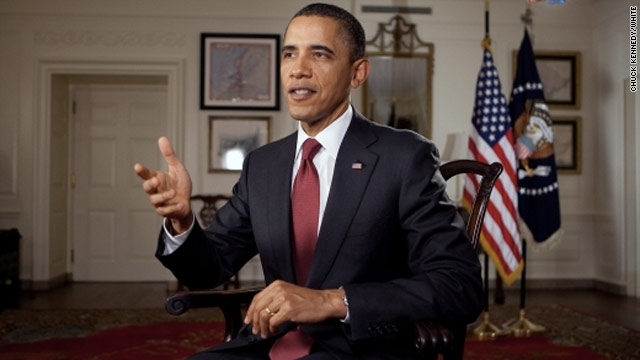 Washington (CNN)-President Obama defined the "true measure of progress" for America in his weekly address Saturday. Focusing on his goal to "win the future" for the second consecutive week, he turned his attention to recent unemployment numbers and jobs.

"Our true measure of progress has to be whether every American who wants a job can find one; whether the jobs available pay well and offer good benefits; whether people in this county can still achieve the American Dream for themselves and their children."

The president asserted that this progress needs to be faster. And in a phrase reminiscent of recent speeches, he said, "To win the future, American needs to out-educate, out-innovate, and out-build the rest of the world."

He also shared lessons from a recent visit to Penn State University, saying, "If you assemble teams of the best minds in your field, and focus on tackling the biggest obstacles ... we'll get behind your work. Your government will support your research.

"If businesses sell these discoveries ... they will hire more workers. And that's how Americans will prosper. That's how we'll win the future."

Obama emphasized the importance of being the best in education, innovation, and infrastructure as he referred to a government obligation to ensure that America is "the best place on Earth to do business."

Because, he said, "if we make America the best place to do business, businesses should make their mark in America." Citing a "mutual responsibility" between business and government, Obama explained that a successful partnership would produce workers who will succeed and a prosperous nation.

House Republican Conference Chairman Jeb Hensarling delivered the GOP rebuttal with reference to an expression from his home state.

"Down here in Texas, we have a saying: 'When you're digging a deep hole for yourself, stop digging.'"

The congressman criticized Obama for economic policies that led the country to "our second trillion-dollar deficit in our nation's history," saying, "While I appreciate the president's 'can-do' rhetoric, his job-destroying policies won't do."

Blaming the deficits for adding uncertainty to the economy and weakening confidence in government, he recommended an "end to the spending binge."

"If the president wants our help to pay off his debts, he's going to have to begin the process of cutting up the credit cards. In other words, we need major spending cuts and major spending reforms," he said.

The conference chair recounted several actions by the House majority it says will cut spending, including the House vote to repeal health care - dependent on Senate approval - a ban on congressional earmarks, and weekly "You Cut" votes. He also discussed plans to introduce a continuing budget resolution that honors a pledge to "cut spending back to the pre-'stimulus,' pre-bailout levels," a controversial pledge for some conservatives.

And according to Hensarling, the moves to make further cuts may continue. "In order to get Americans back to work and create jobs, there is no limit to the amount of spending that we're going to be willing to cut," he said.

Taking direct aim at Obama's keystone, the conference chair affirmed, "Of course, Americans know you don't simply 'win' the future, you've got to plan for it."