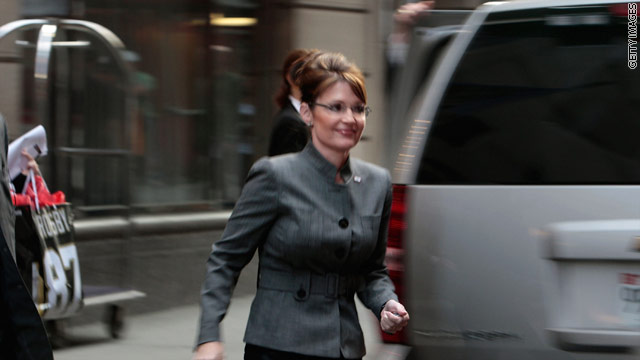 Washington (CNN) - Sarah Palin, in her first comments on the uprising in Egypt, called the situation President Barack Obama's 3 a.m. phone call and said, "It seems the call went right to the answering machine."

In the interview, the potential Republican presidential candidate said, "We need to know what it is America stands for so we know who it is that America will stand with. And we do not have all that information (from the administration) yet."

She told "The Brody File" she was "not real enthused about what it is that's being done on a national level and from (Washington) in regards to understanding all the situation there in Egypt."

Palin criticized the administration's public response, saying "nobody yet has explained to the American public yet what they know, and surely they know more than the rest of us ... who will be taking the place of (Egyptian President Hosni) Mubarak."

"In these areas that are so volatile right now because obviously it's not just Egypt but the other countries too where we are seeing uprisings, we know that now more than ever, we need strength and sound mind there in the White House," she said.

According to a transcript from CBN released Saturday evening, Palin said there were still unanswered questions on the protests that led to the upheaval.

"Remember President Reagan lived that mantra: Trust but verify," she said. "We want to be able to trust those who are screaming for democracy there in Egypt, that there is a true sincere desire for freedoms. And the challenge that we have, though, is how do we verify that what we are told, what it is that the American public are being fed via media, via protesters, via the government there in Egypt in order for us to have some sound information to make wise decisions on what our position is."

On the question of "who's going to fill the void" after Mubarak leaves office, Palin said "Is it going to be the Muslim Brotherhood? We should not stand for that, or with that, or by that."

She told the interviewer, "Any radical Islamists, no, that is not who we should be supporting or standing by. So we need to find out who was behind all the turmoil and the revolt and the protests so that good decisions can be made in terms of who we will stand by and support."