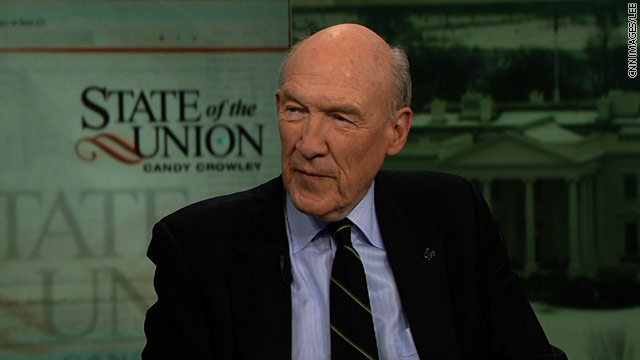 Washington (CNN) - Former Republican Wyoming Sen. Alan Simpson, one of the men tasked with proposing a path to get America's fiscal house in order, said he's still waiting for lawmakers to take on the debt charge.

"I'm waiting for the politician to get up and say, there's only one way to do this, you dig into the big four, Medicare, Medicaid, Social Security, and defense," Simpson said Sunday on CNN's "State of the Union. "Anybody giving you anything different than that, you want to walk out the door, stick your finger down your throat, and give them the green weenie."

Click to watch video
Simpson, who led the commission with Erskine Bowles, former chief of staff to President Bill Clinton, criticized politicians who are proposing to get rid of "earmarks, all waste, fraud and abuse, foreign aid, Air Force One, congressional pensions" as playing politics.

President Obama created the bipartisan group to address the nation's economic challenges. The national debt is currently over $14 trillion and Treasury Secretary Timothy Geithner predicts the United States will hit its debt ceiling of $14.3 trillion, set last year, between the end of March and middle of May.

The debt commission released its proposals to cut $4 trillion from the budget over the next decade in December, but the suggestions failed to win enough committee votes to be considered as one package on the Senate floor. In the president's State of the Union address this year he endorsed fiscal restraint but stopped short of endorsing the plans laid out by the 18-member commission, which included defense cuts, reforming the tax code, changes in social security and controlling health care costs.

But Simpson said re-election is preventing full reform because members of Congress are worried that endorsing the necessary cuts could mean defeat in their next election.