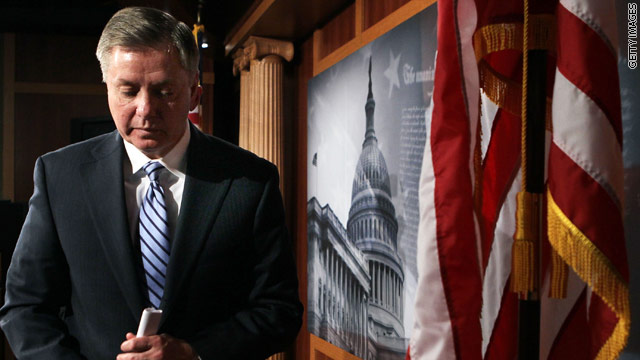 (CNN) - Republican South Carolina Sen. Lindsey Graham may count Sarah Palin as a friend, but he disagrees with her on Egypt.

"I really have no fault with the president, Obama, the way he's handled this process," Graham said in an interview set to air at 7 p.m. ET on CNN's "John King, USA." "I disagree with Governor Palin over this particular issue."

In an interview on the Christian Broadcasting Network over the weekend, the Republican former Alaska governor said the unrest in Egypt was Obama's 3 a.m. phone call, a reference to a line then-presidential candidate Hillary Clinton used during the 2008 election against Obama. Palin said the "call went right to the answering machine."

But Graham, who serves on the Senate Armed Services and Homeland Security committees said Obama has handled the "situation well."

He said the question before the president is what happens between now and September when Egyptian President Hosni Mubarak is set to step down.

"The sooner we can get a transition government, the quicker we can build opposition capacity to have a full and fair, free, transport election in September the better," Graham said.