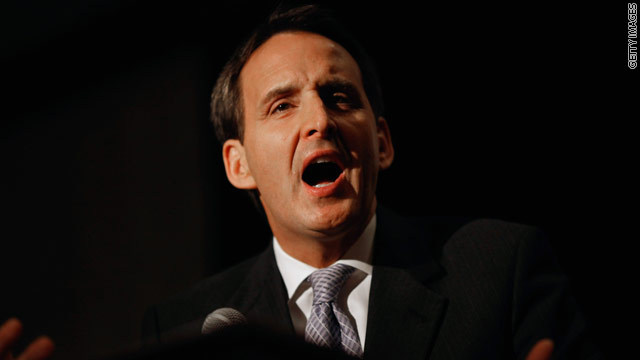 "Yes of course," Pawlenty said when asked if he could win. "If you're not willing to stand by your values, what's the point in doing it anyhow?"

The likely 2012 presidential candidate spoke in Sioux City, Iowa, on Monday as part of a lecture series sponsored by the Family Leader, a socially conservative group, in a speech threaded with his moral values.

With his wife, Mary, by his side, Pawlenty touted his belief that marriage is "between a man and woman" and his pro-life history.

"(It is) hard to have family life unless you respect life," Pawlenty said. "It says in our founding documents and in the Bible that we are to respect life, not destroy life."

In his speech, his third of the day in Iowa, he touched on nearly every major issue facing the country, including jobs, education, health care and the national debt, stressing the importance of individual responsibility.

"We need a system that says parents can be in charge," he said about education.

When talking about the "misguided" health care law, he said "We have to put individuals and families in the driver's seat."

"Can't be pro-jobs and anti-business, that's like being pro-egg and anti-chicken," Pawlenty said.

When addressing his faith, he said his words weren't those of a "politician passing through town," because this is a nation "founded under God."

The former Minnesota state legislator has frequented early presidential primary and caucus states while he continues to say he'll make a final decision about a White House run in the coming months. Pawlenty was in Iowa in January to promote his new book, "Courage to Stand," which discusses his faith and its influence on his public life.