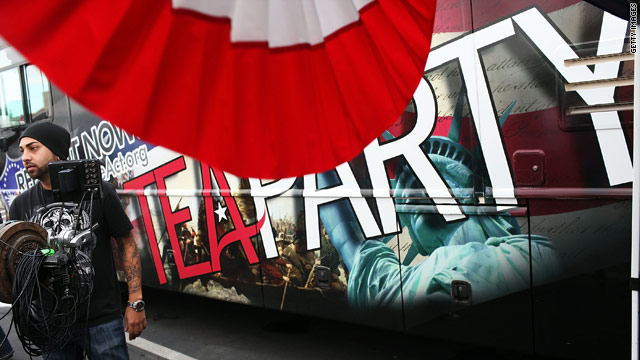 Washington (CNN) - It could turn into a love-fest or, at times, spark heated debates.

On Tuesday in a room at the National Press Club in Washington, a live audience of Tea Party activists will join a virtual audience of activists in cyberspace to question - and perhaps grill - five members of Congress.

The event is being billed as the "first ever" Tea Party town hall. It is sponsored by the Tea Party Express which is teaming up with TeaPartyHD.com for the event. It will feature activists in the audience and others joining via Twitter and Facebook.

Four lawmakers were listed on the press release, distributed last week, as attending the event: Senators Rand Paul of Kentucky and Mike Lee of Utah, along with Minnesota Rep. Michele Bachmann and Iowa Rep. Steve King. All four Republicans are members of their chambers' version of a Tea Party caucus and they enjoy support from the movement, which could make for a largely friendly event.

But activists who worked hard to elect lawmakers say they expect them to honor Tea Party principles - or possibly face a backlash. Lower taxes, less government spending and constitutional fidelity among members of Congress are prime concerns to the movement.

Some of those questions could be directed at Sen. Orrin Hatch. The Utah Republican will also attend the town hall, though his name was not on the original announcement.

But a spokeswoman for Hatch explained it differently.

"Some wires got crossed here," Antonia Ferrier told CNN. "Sen. Hatch was invited to attend a couple of weeks ago. And no harm, no foul. He will be at the event this evening, looking forward to it."

Some Tea Party activists have threatened to try and oust Hatch as he pursues a seventh Senate term. Critics cite votes that, they believe, show Hatch as less than rock-solid conservative and his working with Democrats on various issues.

Ferrier explained that political challenges in the senator's state are not unusual.

"Utah...its system is such that it is built for challenges," Ferrier said. "Sen. Hatch has been challenged before. And he plans for every scenario."

She added: "Sen. Hatch has a solid conservative record. I think to those who may disagree with that - I think Sen. Hatch would certainly want to talk to them about what his record is, when he's done certain things that they may or may not disagree with. At the end of the day he has been a person who's fought throughout his entire career against more taxes, against greater spending."

Ahead of the event, the Tea Party Express Chairman had a broad message to all members of congress.

"There is no senator or congressman in this country who needs to think their seat is safe," Kremer said.

CNN, The Tea Party Express and other Tea Party groups are hosting a first-ever Tea Party presidential debate in Florida this September.