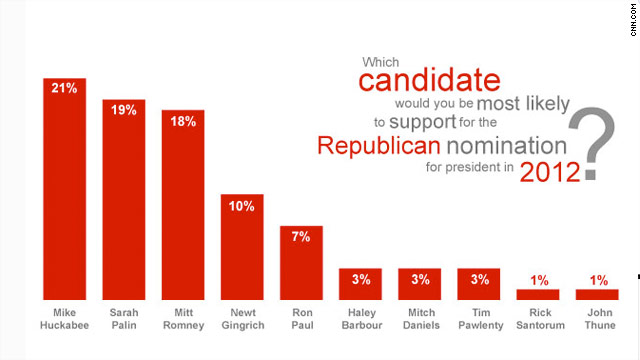 Washington (CNN) - Given the choice between a candidate who agrees with them on the issues or a candidate who can defeat President Barack Obama in 2012, a new national poll indicates Republicans overwhelming want a winner.

According to CNN/Opinion Research Corporation survey released Tuesday, nearly seven out of ten Republicans say they would prefer a GOP presidential nominee who can top Obama in the next election, with 29 percent saying a nominee who agrees with them on every issue that matters the most is more important.

"Republicans are divided on their choice for the GOP nominee in 2012, but they are united in their desire to see Obama ousted from the White House," says CNN Polling Director Keating Holland.

Former House Speaker Newt Gingrich, at ten percent, is the only other Republican tested who gets double-digit support. Rep. Ron Paul of Texas, who made a bid for the last GOP presidential nomination, came in at seven percent, with the remaining potential candidates named in the poll all in the low single digits. CNN's poll numbers are in-line with most other national GOP 2012 horse race surveys.

It's worth remembering that polls taken a year before the first votes will be cast are mostly a matter of name recognition.

"Keep in mind that Joe Lieberman and Rudy Giuliani - both relatively famous when they decided to run for president - were ahead in polls conducted in 2003 and 2007," says Holland. "Neither man won a single primary or caucus once the voting started."

"If that changes for any one of them, they are likely to rise in the horse race question," adds Holland.

So who do Republican think will win their party's presidential nomination? Romney and Palin top that list, but only a quarter of Republicans pick either one as the most likely nominee in 2012.

According to the poll, four out of five Democrats would like to see their party re-nominate Obama for president in 2012, up five points from early November. One in five say they would prefer another Democrat as their party's presidential nominee.

And what about the general election?

The survey indicates that roughly a quarter of all Americans would definitely vote for Obama, a little more than a third say they would definitely vote against him. That leaves approximately four in ten swing voters in the middle - 23 percent who would probably vote for Obama right now, 16 percent who would probably vote against him - but most of whom would be considered "persuadable" by political pros.

Will Obama win? Fifty-one percent of the public says no, with 46 percent predicting he will claim victory in November of 2012.

Iowa and New Hampshire traditionally kick off the presidential primary calendar, but the poll indicates that only 37 percent of all Americans would like to see those two states always come first in the nomination process, with 56 percent saying they would rather see other states go first in the race for the White House.