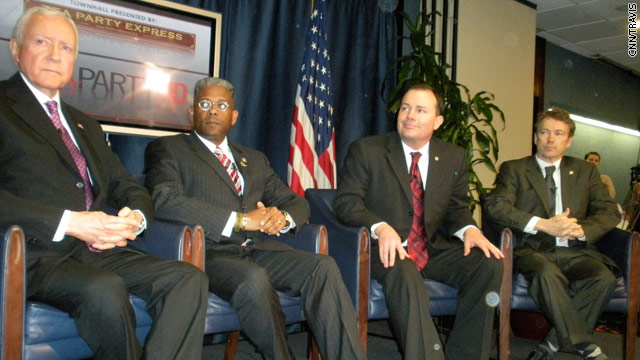 Attendees included Senators Rand Paul of Kentucky, Mike Lee and Orrin Hatch, both of Utah, as well as Representatives Michele Bachmann of Minnesota, Allen West of Florida and Steve King of Iowa.

Before the event, organizers said the lawmakers should expect tough questions from activists in the audience at the National Press Club and from others via Twitter, Facebook and YouTube. Instead, the event took on the air of a pep rally at times. Activists, who staunchly support some of the lawmakers, encouraged them, largely agreed with them and frequently applauded their statements about Constitutionally-limited government, lower taxes and less spending.

Paul - the first lawmaker to speak - praised the movement: "It's an amazing thing, I've never seen anything like this."

Lee echoed his sentiment, saying the Tea Party is not "a passing fad."

Bachmann - a darling of the movement - said she came to the Tea Party Express event because supporters of the cause are the, "Cavalry that did the rescue work in the last election."

Bachmann then repeated her recent statement of concern about the nation.

"No one's really quite sure if we'll transfer that torch of liberty to the next generation," Bachmann said.

For his part, Hatch declared, "It's time for America to take back America and the Tea Party will play a role in that."

The story of Hatch's appearance presented a bit of a sub-text to the carefully-orchestrated event.

The Tea Party Express has told CNN it does not intend to politically target the senator as he pursues a seventh term. But other Tea Party activists claim Hatch is not a reliable conservative. They cite some of his votes, like for TARP, and his collaboration at times with Democrats.

On Tuesday, the Tea Party Express distributed an e-mail with the headline, "TONIGHT: Orrin Hatch Faces the Tea Party Movement." The e-mail said that Hatch "continues his outreach" to activists and that he'd face questions from those "who have both criticized and praised" his record.

On Monday, Express Chairman Amy Kremer told CNN that Hatch "invited himself" to the event. But the group, along with a spokeswoman for Hatch later explained that the senator had been previously invited. Both sides cited a miscommunication that sparked the notion of Hatch coming to an event where he had not originally been invited.

In a scrum with reporters, separate from the town hall, Hatch defended his conservative credentials. He added that he does not fear a possible political challenge from a fellow Utah Republican.