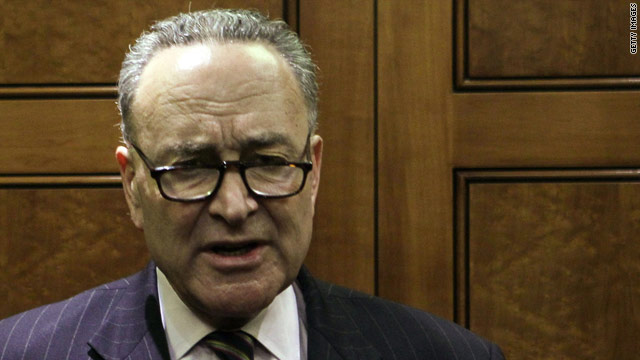 Washington (CNN) - Senate Democrats faced criticism Tuesday for urging House Republicans to cut "taxpayer-funded handouts to big oil companies" less than a week after several Democrats joined Republicans to defeat a Senate amendment that would have made similar cuts.

Schumer and other Democrats, including the other three top Democratic leaders, sent a letter to Boehner Tuesday suggesting House Republicans do away with tax breaks for oil companies as part of the Republicans' ongoing effort to scrub wasteful spending and cut the deficit.

"We are concerned that some of the cuts you may propose could undermine future growth just as our economy is beginning to recover," said the Democrats' letter. "Instead, we urge you to consider ending a number of tax loopholes and other subsidies that benefit big oil and gas companies."

However, six politically centrist Senate Democrats voted against paring back "unjustified tax expenditures related to oil and gas production by large oil companies," in the words of amendment sponsor Sen. Carl Levin, D-Michigan, when he proposed it last week to cover the cost of repealing part of the health care reform law.

Republicans argued a repeal of the subsides would amount to a tax hike on the oil companies.

"So Sen. Schumer is suggesting that the Republican House should pass job-destroying tax hikes that even the Democrat-controlled Senate doesn't support?" Steel asked.

"We understand Sen. Schumer has sent a letter over to Republicans today, indicating the need to cut spending," Senate Republican Leader Mitch McConnell confidently told a bank of television cameras in the Capitol. "We don't really believe you cut spending by raising taxes."

A spokesman for Senate Majority Leader Harry Reid issued a statement late Tuesday accusing Republicans of defending "government giveaways to their buddies at big oil companies making billions in profits" and asked why Republicans would take cuts in subsidies to oil companies off the table. The statement didn't mention the six centrist Democrats who last week voted against canceling the tax breaks.