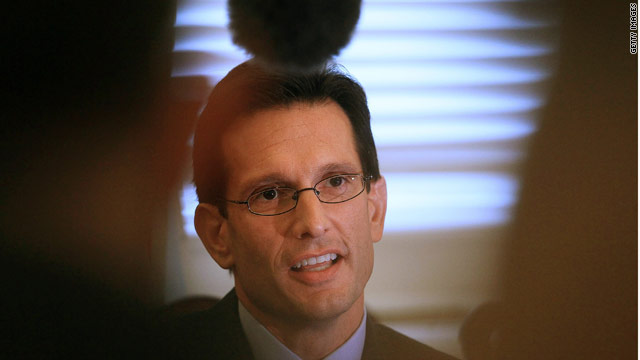 House GOP to move next week on health care defunding

Washington (CNN) - A day before House Republican leaders head to a lunch with President Obama at the White House, House Majority Leader Eric Cantor said that the GOP will move next week to try to block funding for one of the President's biggest priorities – health care reform.

Asked at his weekly session with reporters whether the government funding bill the House is preparing to vote on will include money to pay for the new health care law, Cantor said, "I expect to see one way or the other the product coming out of the House to speak to that and to preclude any funding to be used for that."

House GOP leaders have vowed that they would use Congress' power of the purse to defund the new law. But Cantor's statement Tuesday was the first official word that the Republican-led House would begin that effort right away.

The House is scheduled to vote next week on a spending bill that funds government agencies for the remaining seven months of the 2011 fiscal year. The current resolution expires on March 4th. Many of the major provisions of the new health care law do not go into effect until 2014, but some federal agencies, such as the Department of Health and Human Services, are beginning to implement parts of the law, so Congress could start choking off money to these agencies, preventing them from moving ahead with this work.

Last month the House passed a bill repealing the new health care law, but an effort by Senate Republicans to pass the bill in the Senate was blocked by Democrats.