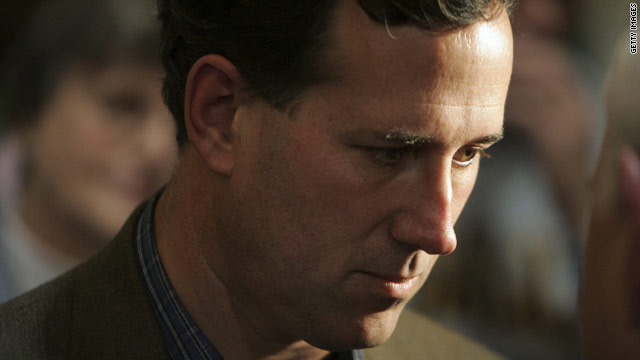 Washington (CNN) - Former Pennsylvania Sen. Rick Santorum is taking aim at Politico over a report that claimed he is throwing punches at Sarah Palin for turning down an invitation at a high profile gathering of conservatives in Washington.

"This article is garbage," Santorum tweeted Wednesday morning. "All I said was- she is VERY busy, PERIOD. "

The comments that Politico's report referenced came in an interview Tuesday with conservative online radio host S.E. Cupp, during which the all-but-declared presidential candidate said Palin likely turned down an invitation to keynote the upcoming Conservative Political Action Conference because she has other "business opportunities."

"I have a feeling that she has some demands on her time, and a lot of them have financial benefit attached to them," Santorum also told Cupp, adding later Palin's mothering responsibilities may have also kept her away from Washington this weekend.

"I don't live in Alaska and I'm not the mother to all these kids and I don't have other responsibilities that she has," he said.

Politico called the comments a "knock" on Palin, under the headline, "Rick Santorum: Sarah Palin skips CPAC for C-notes."

"Reporter trying to create something out of nothing," Santorum added in his tweet.

Last week Palin turned down an invitation from organizers of CPAC to serve as the annual event's keynote speaker. It's the fourth time Palin has declined to appear at the conference that is among one of the most closely watched early gatherings of conservatives.

In a follow up post Wednesday, Politico reporter Andy Barr wrote Santorum is "Twe-eating his Palin words," adding that the ex-senator's original comments implied "that [Palin's] rebuffing the annual conservative gathering for a paid speech."