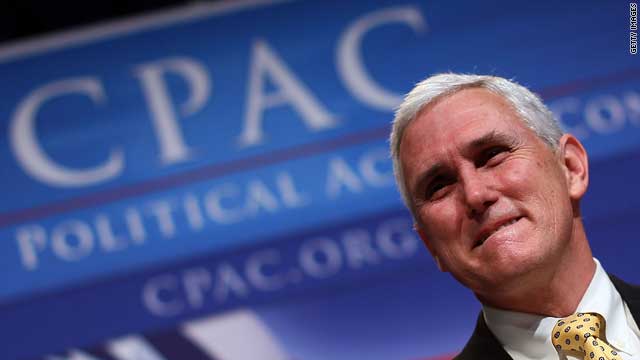 (CNN) - Conservative activists have descended upon D.C. for the annual Conservative Political Action Conference. CNN takes a look at who the key speakers are Thursday.

- Republican representing Minnesota's 6th congressional district since 2007
- Sits on the Financial Services Committee
- First woman to be elected to the House from Minnesota
- A noted tea party candidate and helped start the Tea Party Caucus in Congress
- There is speculation that she may run for the 2012 Republican nomination for president
- Before serving in the House, she was a Minnesota state senator and attorney
- Bachmann and her husband have five children; have taken in 23 foster children

- South Dakota Republican and Tea Party favorite won election in 2010
- Tapped to be a Freshman Leadership Representative, a position created this year
- Serves on the Natural Resources Committee and the Education and Workforce Committee
- A rancher, farmer and hunting lodge owner
- Elected to the South Dakota House of Representatives in 2006, later becoming assistant majority leader
- Has three children with her husband

- Senate minority leader from Kentucky
- First elected to the leadership position in 2006
- Senior member of the Appropriations, Agriculture and Rules Committees
- Served as chairman of the National Republican Senatorial Committee in 1998 and 2000
- Before the Senate, he was a judge-executive of Jefferson County
–Married to Elaine Chao, the former labor secretary under President George W. Bush; the couple has three daughters

- Former Speaker of the House
- Helped Republicans take back control of Congress in 1994
- Known as the architect of the "Contract with America"
- First elected to the House in 1978, serving Georgia's 6th congressional district until 1999
- Now an author, political scholar, consultant and member of several organizations' boards
- Observers say he is mulling a run for the 2012 Republican presidential nomination
- Married and has two daughters and two sons-in-law

- Served as Pennsylvania's Republican senator from 1995-2007
- Was part of the Senate Republican leadership
- Elected to the House in 1990 at the age of 32
- Author of the 2005 book, "It Takes a Family"
- Now a senior fellow at The Ethics and Public Policy Center, Fox News contributor and columnist with The Philadelphia Inquirer
- His political action committee – America's Foundation – helps candidates and issues Santorum is dedicated to
- Widely believed to be a Republican contender for president in 2012 after making several stops in early primary states, among other things
- Santorum and his wife have seven children

–Executive vice president and chief executive officer for the National Rifle Association
–Responsible for implementing NRA policy and pushing his organization's agenda on gun rights
–Joined the NRA organization in 1979 as a state liaison in the NRA Institute for Legislative Action, and later promoted to director of state and local affairs in 1979 – and director of federal affairs
–On the board of directors at the American Association of Political Consultants

–Tea Party-backed Republican who won Kentucky's open Senate seat in 2010
- Serves on the following committees: Energy and Natural Resources; Health, Education, Labor and Pensions; Homeland Security and Governmental Affairs; Small Business and Entrepreneurship
–He is a doctor and owns an ophthalmology practice
–The son of Texas GOP Rep. Ron Paul, who ran for the 2008 Republican presidential nomination
–Considered to be a contender for the 2012 race
–Married with three sons

- Republican congressman representing Wisconsin's 1st congressional district since 1999
- Chairman of the House Budget Committee and senior member of the House Ways and Means Committee
- Viewed as the Republicans' budget hawk, who has railed against government spending and the Democrats' economic policies
- Delivered the GOP response to President Obama's 2011 State of the Union Address
- Previous employment included marketing consultant and congressional aide
- Ryan and his wife have three children