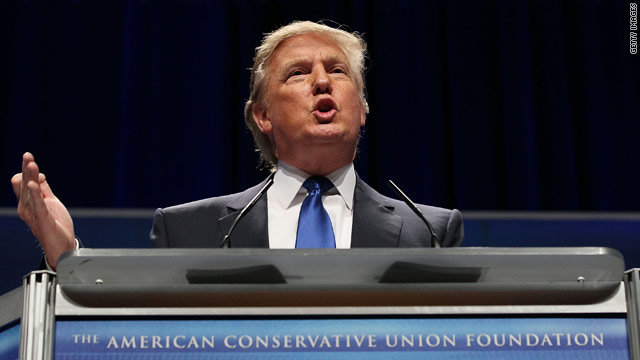 Washington (CNN) - The unsettled and wide-open state of the 2012 Republican presidential primary race has a fidgety Washington press corps jumping at every new rumor, trial balloon and incremental tidbit emerging from the mouths of the potential candidates and their advisers.

Donald Trump's last minute decision to appear Thursday at the Conservative Political Action Conference in Washington managed, for a few bizarre minutes, to transform a handful of otherwise discerning political journalists into crazed pack of humanity scrambling around a Washington hotel for the brief chance to speak to the real estate mogul and reality TV star who, for yet another election cycle, is professing to be serious about running for president.

Reporters from CNN, The New York Times, The Washington Post and The Daily Caller, among others, were given a late heads up Thursday afternoon that Trump would take some questions before his speech to the thousands of conservative activists jammed into the Marriott Wardman Park hotel for the annual conference.

Trump showed up at the invitation of GOProud, the pro-gay Republican organization welcomed by CPAC officials as a "participating organization" - a decision that angered several influential social conservative groups now boycotting the event.

GOProud staffers told the media that Trump would meet them in an upstairs suite that featured plate of barely touched Cosi sandwiches, some drinks and a decorative fruit basket.

After milling about for nearly an hour because Trump was late landing at Dulles Airport in Virginia, the press pack was suddenly informed that the man of the hour was "one minute away" and that he would take questions in a lobby near the front entrance of a separate hotel tower.

Off the reporters and CNN photographers went, cramming into a small elevator to head downstairs and then zooming across the sprawling hotel to meet Trump as he arrived to bask in the glow of some early, and perhaps unrealistic, presidential buzz.

The directive to set up in the lobby, though, was apparently incorrect - no one was told why - and the reporters were sent back up the hallway from whence they came to wait in a different lobby. Wrong again. The press then trekked back and forth down the same corridor two more times as GOProud staffers and security provided conflicting directions, with Trump en route.

Richard Mourdock, a likely Republican Senate candidate in Indiana, happened to be seated along the hallway with several aides who gradually watched the spectacle unfold with a mix of confusion and amusement. The same was true for a handful of advisers to Mitt Romney, another Republican regarded as a more viable potential candidate, lingering nearby.

And suddenly, Trump arrived in all his splendor: scowling face, glorious comb-over, hands shoved in his coat pockets and backlit by another clutch of television cameras who happened to catch his arrival and trailed him up the hallway into the second lobby where the press had settled.

Trump stopped, as if emerging from a closed-door meeting on Capitol Hill, to finally meet the waiting reporters - for all of 48 seconds.

"I am a Republican," he said when asked if he truly plans to embark on a White House bid. "Let's see what happens."

After he briefly responded to two more questions, Trump's entourage called an end to the press conference and whisked him through the gaggle and into an elevator that took him up to the hotel suite for a few moments of peace before his big speech.