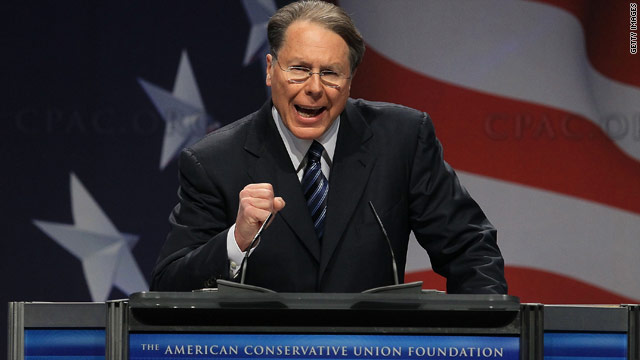 NRA leader: 'Government policies are getting us killed'

Washington (CNN)– "Government policies are getting us killed" and the shootings in Tucson revealed the failure of government, said Wayne LaPierre, executive vice president of the National Rifle Association, Thursday.

Speaking at the Conservative Political Action Conference (CPAC), LaPierre said government has failed with "laws, lies, and lack of enforcement." CPAC is the largest annual gathering of conservative activists and this year is particularly notable as it has become a cattle-call of potential GOP presidential candidates.

"If Tucson taught us anything it taught us this: Government failed," LaPierre said. "And when they tell you that a ban on assault weapons can make you safer, don't you buy it, not one second, because it's a lie. Their laws don't work, their lies aren't true. By its laws and lies and lack of enforcement, government policies are getting us killed."

LaPierre's description of government failure was a focus as he addressed violence in society from the tragedy in Tucson to the number of bad guys in Washington, DC "walking the streets" (30,000, according to his speech).

Speaking on criticism of his organization following the Tucson shootings, LaPierre said the NRA refused to comment in the event's aftermath because it was "not the first time we've found ourselves on this side." He cued a video of former NRA leader Charlton Heston addressing criticism of the pro-gun rights group following school shootings at Columbine High School in Colorado: "Simply being silent is so often the right thing to do," Heston said at the time.

The NRA's outspoken leader did not stay silent on the right to bear arms Thursday, however. LaPierre railed against government laws that restrict gun ownership, criticized the media for its attention to "deranged killers," saying that it "ought to be ashamed," and lashed out at "political elites that want us to believe that if we just pass another law or two we can stop a mad man bent on a streak of violence."

LaPierre gave a warning to the CPAC crowd: "As soon as we leave this hall your life will be in jeopardy," he said. Citing "25,000 violent crimes" committed every week "according to the FBI" he asked "How safe do you feel? How safe do you really feel?"

And his response to anti-gun laws was equally tough: "These clowns want to ban magazines? Are you kidding me? That's their response to the blizzard of mayhem. One more gun law... that's going to disarm...and make all of us less safe and the deranged and the violent more safe."

LaPierre has a remedy for the mayhem that he spoke about. "Throughout history the presence of a gun in the hands of a good person makes us all safer," he said, because "The whole flock is safer when the wolves can't tell the difference between the lions and the lambs."

The NRA leader issued a rallying call to arms at CPAC as he called on conservatives to act.

"No more laws and lies and government failure. At the scene of the crime, there's always the offender and the victim. It's time the victims in this country got a fighting chance," LaPierre said.