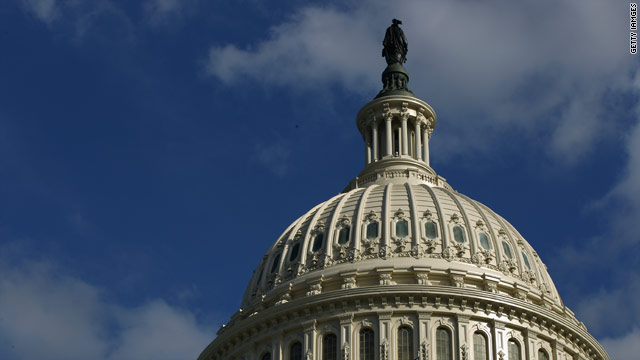 "I know that that's not something leadership wants to do. Is it a possibility? Yes, it is a possibility, but we're going to do everything we can to make sure that doesn't happen," Rep. Mike Simpson, R-Idaho, told reporters off the House floor Thursday.

Simpson, who chairs a House Appropriations subcommittee, is the highest ranking Republican to go that far in suggesting a government shut down could happen.

Conservatives are forcing House GOP leaders to cut more spending this year than they had planned in order to live up to the Republican pledge to cut $100 billion in spending before the end of the year.

"There are an awful lot of Members of our conference who said 'no, I committed to cutting $100 billion,'" Simpson said.

That is causing tension inside the new House Republican Majority Thursday, as GOP leaders were getting their first taste of how hard it is to control new Republican lawmakers demanding their leadership live up to campaign promises on cutting spending.

Afterwards, House GOP leaders said they were uniting behind a spending cut plan they insist will meet their campaign pledge to cut $100 billion this year, but offered no specifics. GOP aides said details would be released Friday.

Cantor said that the $100 billion figure is based on spending cuts from the President's proposed budget that never passed, not the current spending levels, which are lower, so they will likely still amount to a number lower than $100 billion.

Republicans leaders had argued there was no need to meet the goal of $100 billion, since the fiscal year is almost half way over now

Now, these sources say Republican leaders are scrambling to find more cuts, in order to avoid a public intra-party fight when the bill is on the House floor next week.

Simpson made clear he believed the cuts GOP leaders had planned were enough, but appeared resigned to try to find more ways to slash spending.

Asked whether the pledge to cut $100 billion "took on a life of its own," Simpson said it did.

"It's a promise that we made to the American people during the campaign. That's what many of the freshman and many of the members also feel, and if that's the direction that our conference wants to go, I'm more than willing to do it," said the Idaho Republican.

Referring to cuts by his own appropriations subcommittee, Simpson plaintively said, "if you want me to cut the Interior budget in half I can do that. And I can bring that to the floor. I don't know that it will pass, and it will be ugly, just tell me a number and I'll get there."

He warned that Republicans are going to face a dilemma when it comes to a vote on steep cuts that may cause some political fallout.

"Individuals are going to have to decide whether voting for some of these cuts – which will be substantial in some areas and they may get backlash from voting for them – whether that's worse than doing what they are concerned about, and that's not doing the $100 billion."

In fact, some GOP leadership sources privately say they worry new Republican lawmakers don't yet realize the real world consequences of the steep spending cuts they are demanding.

Rep. Tim Scott, R-SC, a freshman Republican leader, responded to that by saying, so be it.

"The fact that we may be completely ignorant to the process here, God bless us, because our ignorance has just saved the American people more money," Scott told CNN.

Both men spoke to CNN coming out of their meeting on this issue with House GOP leaders.

"I'm elated that leadership is listening to concerns that we had, that the cuts just weren't enough," said Nunnelee.

But other conservatives were more skeptical.

Rep Jeff Flake, R-Ariz., who has criticized the figures outlined last week because they fell short of the pledge to cut $100 billion said he wants to see– "a real $100 billion" - in non-security spending cuts, but said if leaders are also going to include Homeland security and defense spending in the mix of spending reductions, "the figure ought to be higher."

Flake said he was concerned that House GOP leaders' initial proposal to cut spending in this year's funding bill fell short. "I thought it was pretty clear to all of us that we needed to go a little bit more deeply, but I think they are coming around."

The Arizona Republican acknowledged that some House Republicans may feel that it's safe to vote for larger cuts because ultimately the Democratic led Senate will not support cuts of that size. But Flake added, "There are some that think to negotiate with the Senate you should go in with the biggest number you can get. A lot of us feel that way."