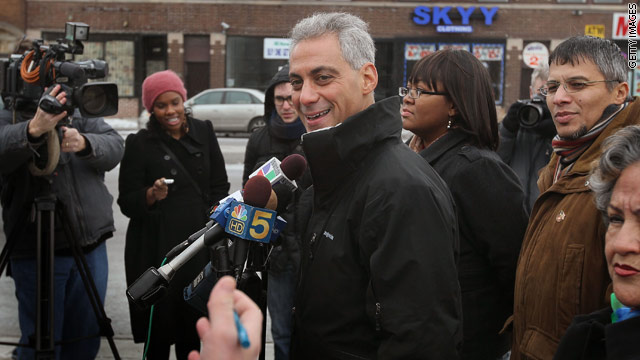 (CNN) - With 11 days to go until Chicago's mayoral election, a new poll indicates that front-runner Rahm Emanuel is closing in on the crucial 50 percent threshold, which would prevent the need for a runoff in April.

According to a Chicago Tribune/WGN survey, 49 percent of the city's voters back the former White House chief of staff for mayor, with former Chicago Board of Education president Gery Chico at 19 percent, former Sen. Carol Moseley Braun at 10 percent, City Clerk Miguel del Valle at eight percent and 12 percent undecided.

If Emanuel wins more than 50 percent of the vote in the February 22 contest, there will be no need for a runoff election in April between the top two finishers. Early voting has been underway since January 31.

Braun, who had been considered the "consensus candidate" of Chicago's African-American community, appears to have dropped in the polls after a much talked about flap in which she suggested that community activist Patricia Van Pelt-Watkins, who is also black and who is also running for mayor, had been "strung out on crack." While Van Pelt-Watkins acknowledged past illegal drug use, she denies ever using crack.

Braun apologized two days later but the poll suggests the incident damaged her in the eyes of some voters. According to the survey, Braun's support among black voters dropped from 39 percent last month to 20 percent now. The poll indicates that Emanuel has the backing of 48 percent of Chicago's black voters and 55 percent of the city's white voters. According to the survey, Chico has the backing of 38 percent of the Hispanic voters with Emanuel four points back.

The winner will succeed longtime Chicago Mayor Richard Daley, who announced in September that he would not seek a seventh term in office.

The Chicago Tribune/WGN poll was conducted February 5-9, with 718 likely registered voters questioned by telephone. The survey's sampling error is plus or minus 3.7 percentage points.