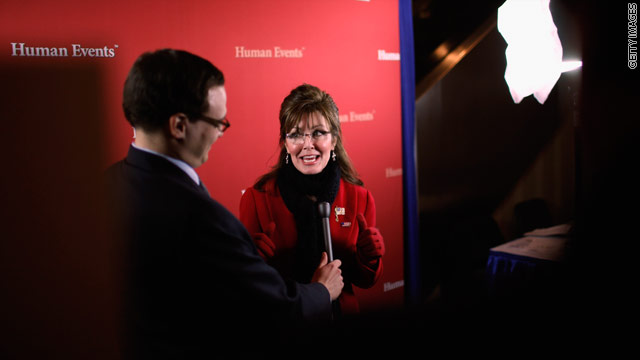 Washington (CNN) - Did Sarah Palin make the trip from Wasilla, Alaska to Washington, DC for the Conservative Political Action Conference after all?

No. But Palin impersonator Patti Lyons convinced more than a few young conservatives she did.

Lyons, who has Palin's look nailed down and calls herself "the world's premier Sarah Palin impressionist," sauntered around the conference of conservative activists commanding all the attention the real Palin would - hounded by television cameras, curious reporters, and some excited attendees who thought Lyons was the real deal.

At one moment Friday morning, Lyons – err, Palin – was swarmed by scores of college-age Republicans as Mitt Romney – the real one - was speaking in the ballroom fifty feet away. When it was apparent Lyons was in fact not the real Palin, many wanted her autograph anyway.

Speaking to CNN, Lyons wouldn't reveal her actual political leanings, saying they tend to vary depending on the type of event she attends.

The real Palin informed organizers last week she was not able to attend the annual gathering of some 11,000 activists, citing scheduling conflicts. She had been asked to deliver the key-note address Saturday. CPAC has become an early testing ground for potential GOP presidential candidates.