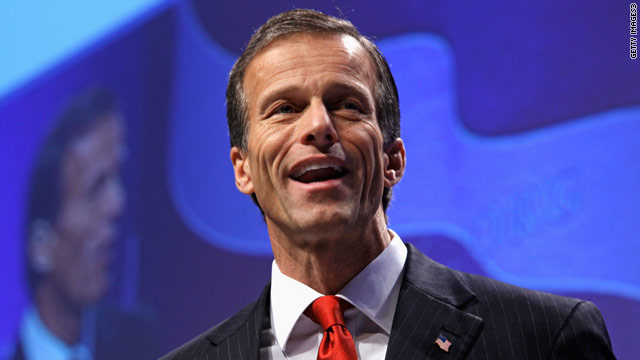 Washington (CNN) - He took the stage at the Conservative Political Action Conference to chants of 'Run John, Run," but Sen. John Thune gave the crowd of eager conservative activists in Washington few hints on whether he will mount a bid for the White House.

The South Dakota Republican did however compare himself to some other likely presidential candidates, noting he caries a decidedly lower profile and may already be a step behind the process of getting his name out.

"It's fair to say I don't have the same national name recognition as some of my Republican colleagues," said Thune. "I've never had a book signing. I've been to Iowa many times, but only on my way to South Dakota. The closest I've ever been on a reality show is C-SPAN's coverage of the Senate Floor. "

The two-term senator went on to serve up a plate of red-meat to the ballroom-capacity crowd, deriding the Obama administration on everything from health care, to its energy policies, to proposed spending cuts on the defense budget.

"To those of us who value freedom and liberty, Washington has been a pretty lonely place for the last two years," Thune said, adding later, "Since 2008 we have witnessed the largest expansion of government since 1960. All that government means a lot less freedom, and it comes with a hefty price tag. "

The South Dakota senator has said he will announce his presidential decision by the end of February, though he is leaning against it, according to several media reports. Speaking to reporters Friday, he added that he is "coming to the final stages" of his decision.

Still, his speech carried all the trappings of a candidate-in-waiting: