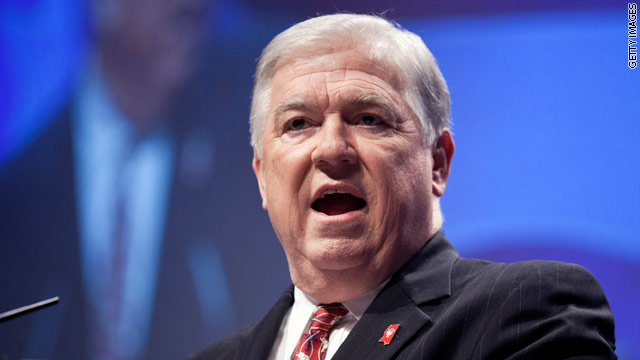 Washington (CNN) - Mississippi Governor Haley Barbour may not be focused on running for president yet, but at the Conservative Political Action Conference (CPAC) he had the talking points of a GOP candidate down.

Barbour called for the reining in of "government gone wild" as the one of the most important goals of 2012. Comparing his conservative policies against those of liberals he said "You know in a liberal ideology every dollar earned belongs to the government."

Barbour railed against "bigger government," and "failure to control spending," as he criticized President Obama's administration and it's policies toward employment, stating that it "paid lip service to job creation except this time they call it investments rather than stimulus."

"When America needed a growth in strategy...he gave us a 1 trillion dollar stimulus bill that only stimulated more government. Instead of focusing on jobs...he spent a year concocting a government-run health care system…that stifles job creation," Barbour continued.

He pledged that the GOP will "cut spending and take the first step towards restoring sanity towards the government" because "we want an important victory in November."

The rumored 2012 hopeful expressed his faith in the House Republicans and issued a call to stay focused. "Our new majority can stop the worst excesses, stop funding for bad policies," he said.

"Fellow conservatives 2012 will be a year of decision. In 2011 the American people didn't give us a referendum to govern. They gave us a chance. So let's make the most of it."

And Barbour addressed what may be seen as the elephant in the room: a growing rift among conservative activists as Tea Party-backed candidates challenge Republican incumbents in office, and win.

In a move that sought to unify his like-minded colleagues he rejected any claims of a rift, saying, "The left media says the Tea Party is dangerous to Republicans. This is a case of the left whistling past the graveyard."

"Our agenda is Americans' agenda and with your help our team will be a winning team, American team, in 2012," he said.