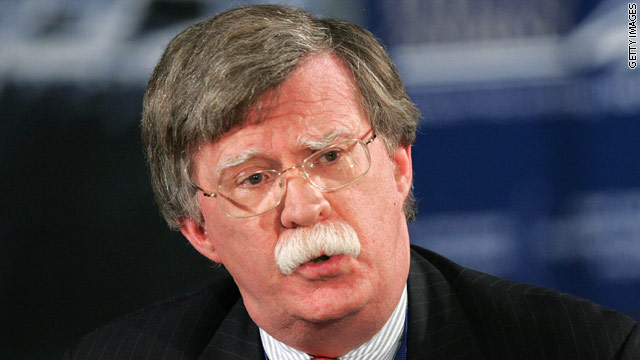 And specifically on the topic of the revolution in Egypt, Bolton stated "We don't have the leadership in the White House that can deal with it."

Bolton recognized the Egyptian call for democracy, but questioned the administration's answer. "We have some degree of optimism, we can recognize that many of the people are legitimately calling for liberty and democracy as we see it," he said.

"But we know it is a responsibility of our government to protect our government and our friends and our allies," he continued, "Never forget Theodore Roosevelt's response: first and foremost we must make the world safe for ourselves."

Recommending a "careful and prudent approach," Bolton cautioned that "A democratic election can produce illiberal results. If you want to see what a Muslim Brotherhood looks like when it takes control, look at Hamas in the Gaza strip, it's not pretty."

"There is no guarantee that democratic forces can keep things moving in the right direction," he warned.

Finding fault with Obama's treatment of national security, Bolton said, "This is a critical time where we need a president who understands priorities, not somebody who's concerned with staying on top of media spin cycle."

And at a time when budget recommendations are a hot topic for discussion, Bolton offered some of his own.

"This is not the time for indiscriminate budget cuts in our national defense budget. A dollar well spent on defense is much more important than a dollar spent in the Agriculture department, the Interior department."