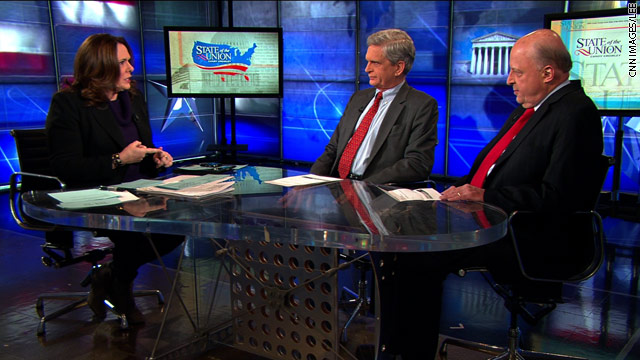 Washington (CNN) - Here's what I get from the totality of the show. There's going to be a big to and fro when Egypt actually holds its elections. We heard Lindsey Graham saying, 'Listen you can't hold them too quickly because it takes a little while to get democratic institutions into place.' When you think about it, it's not just the Egyptians who want to get rid of Hosni Mubarak but you know, they've now disbanded the parliament. But they have all these government bureaucracies, all of which are seen a corrupt and certainly are Mubarak creations. So they have to start a whole new justice system, they have to write a whole new constitution, they've got to have elections.

Click to watch video
So there are these two schools of thought that we talked about and Lindsey Graham obviously goes on the "slow the clock" school of thought, which is take your time, figure out to do it, then hold meaningful elections. I loved his line, Senator Graham's line about you know if Egypt could put a really solid democracy into place it would do more for civilization than the pyramids. I thought that was a good line.

We learned from our two ambassadors that there really is a sweet spot between going too fast and messing up elections, and going too slow and failing to address the needs of the protesters. As always I just think Negroponte and Walker are terrific. Both of them saying that the U.S. has some fence-mending to do, particularly with Saudi Arabia. Saudi Arabia being a little angry with the U.S. because they think they threw Mubarak overboard.

Then I just think the budget – it's budget season, what can I tell you? Huge, big budget fight. We had the president's OMB guy out. Some of these cuts that they're talking about, that he talked about today: cuts in Pell Grants for schools in the summer. There will be no Pell Grants in the summer, charging interest on Pell Grants for graduate students from the very beginning of their graduate school experience. So somebody is going to holler about every budget cut that's in the president's budget. In the end the numbers don't matter but it's a pretty good indication of priorities. So the budget battle starts tomorrow, you get a little preview. See you next Sunday with former Defense Secretary Donald Rumsfeld.

STATE OF THE UNION HIGHLIGHTS

"I'm looking for a free, fair transparent election that would get the full flavor of Egypt. And a rushed election could help an organization like the Muslim Brotherhood. So my advice to the Egyptian people is, take your time, reach out to the world at large. A lot of people want to help you. And I'm not so sure you can do all the things you need to do between now and September to have an election that reflects the full will of the Egyptian people and to create democratic capacity."

"If we can pull this off, if the Egyptian people can create a democracy in the heart of the Arab world, it will be a more significant contribution to civilization than the great pyramids. It really will have a long-lasting effect."

Edward Walker, former ambassador to Egypt on CNN's "State of the Union" on the U.S. role in Egypt

"It's… going to require one message coming out of the United States. And we've just had too many different voices coming out and indications of differences within the White House or within the State Department and so on. So we need to get the message straight."

Edward Walker, former ambassador to Egypt on CNN's "State of the Union"on the suspension of Egypt's constitution

"It's a necessary thing. Because you can't rebuild until you get rid of the old. If you look through the constitution, it's virtually impossible to think how you would reform it to meet the demands of the Egyptian people. And so taking it o ff the table for now and reconstructing it, particularly those elements related to elections and who can run, it's critically important for the next step."

John Negroponte, former U.N. ambassador on CNN's "State of the Union" on the U.S. role in Egypt

"I think it would be good to restrain ourselves, but I think we're going to play a role of holding the military's feet to the fire so that it continues to be responsive to these popular demands, revise the constitution, make it possible for more people to run, make it possible for multiple political parties to thrive sort of all the while at the same time making it clear that it's up to the Egyptians themselves to decide."

"We have a responsible budget that will cut in half the deficit by the end of the president's first term. It deals with all parts of the budget, and it's a plan which we can look forward to presenting it to the Congress and getting a bipartisan discussion going on how to achieve it."