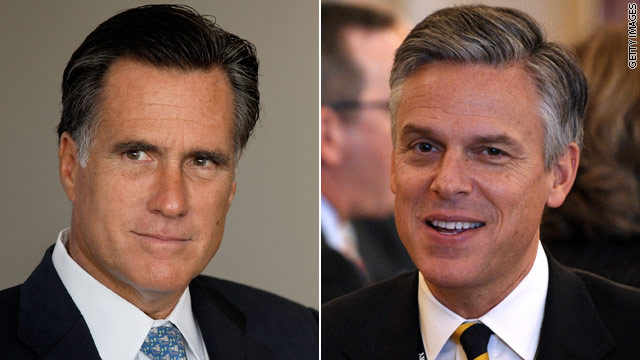 (CNN) - A new poll shows U.S. Ambassador to China Jon Huntsman might face some obstacles in Utah if he decides to launch a bid for the White House.

In a hypothetical presidential match-up between the former Utah governor and former Massachusetts Gov. Mitt Romney, 56 percent of Utahans would cast their ballot for Romney and 26 percent would choose Huntsman, according to the Deseret News/KSL poll released Saturday.

Romney, who will likely run for the GOP nomination in 2012, is a graduate of Utah's Brigham Young University and headed up the 2002 Winter Olympics in Salt Lake City. He won the 2008 Utah Republican presidential primary with 90 percent of the vote, before eventually losing the nomination to Arizona Sen. John McCain.

Huntsman resigned during his second term as governor of the Beehive state to serve as President Obama's ambassador to China in 2009, a position he will leave at the end of April amid speculation he will seek the Republican nomination in 2012.

Both men are members of the Church of Jesus Christ of Latter-day Saints, which constitutes a key voting bloc in the state.

The poll of 496 residents was conducted between February 8 and 10, and has a margin of error of plus or minus 4.4 percentage points.